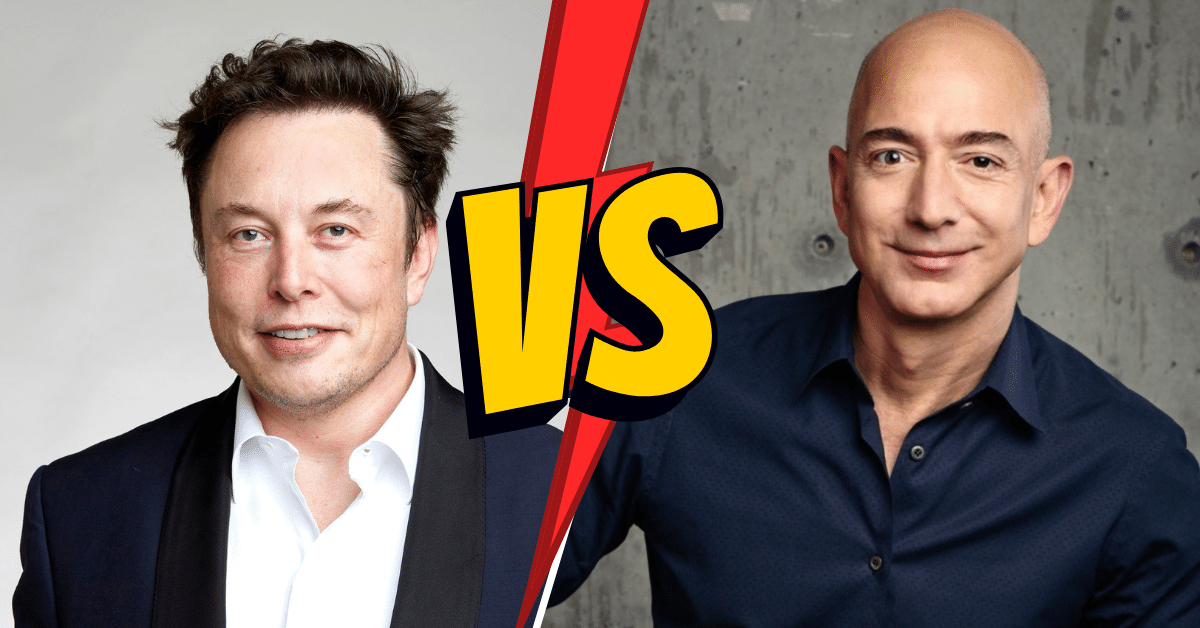 Jeff Bezos and Elon Musk are the two richest people in the world. While each has made a name for themselves, it seems the world isn’t large enough to accommodate their ego and wealth. As such, they’ve expanded their playing field into outer space. Bezos and Musk own Blue Origin and Space X respectively. These are two major companies in a tight race towards turning space tourism into a reality. Musk has had notable success with his company, SpaceX. In fact, so far, SpaceX has accomplished multiple successful rocket launches and manned space missions. On the other hand, Bezos and the rest of the Blue Origin  team were lagging far behind for a while. That was until their successful launch into space on July 20, 2021. For space fanatics, these forays into space signal a new dawn for the exploration of outer space. To Bezos and Musk, this is also a new phase in their rivalry.

Origin of the feud

The Musk-Bezos rivalry seems to date back to 2004. During this period, both Space X and Blue Origin were in their early phases. In other words, neither of them had attempted to launch a mission into outer space yet. However, that didn’t stop their feud. When the two met in person to exchange ideas on their ambitions, the meeting didn’t go well . According to “The Space Barons”, Musk said that his counterpart ignored his advice even though it was good.

From 2004, there was silence between the two rivals. However, that ended in 2013, when the two found got into a competition over the control of the NASA launch pad. SpaceX had applied for exclusive access to the NASA launchpad, and Blue Origin was against this. Another SpaceX rival, United Launch Alliance, also expressed opposition to this. Bezos argued that the launch pad needed to be commercial so that they could all have access to it. However, Musk didn’t take this comment lightly. In fact, he termed the approach a “Phony blocking tactic”. To put this disagreement into perspective, it’s helpful to note that Blue Origin has no suborbital spacecraft they can rely on, even after over a decade in development. However, if they accomplish that in the next half a decade, they will accommodate their need for Pad 39A. It’s for this reason that Bezos needed access to the NASA launch pad. Eventually, after a protracted battle, Musk and his company won the exclusive rights over the launch pad.

Blue Origin aims for a patent over drone ships

Drone ships are essential when landing rocket boosters. Blue Origin was after the drone ship patent, and this time SpaceX submitted a petition against the move in an effort to invalidate the deal. The Space X team argued that If Blue Origin were to own the patent over the drone ship, other companies would have to pay to use it. According to SpaceX, the drone ship technology has been there for years, and the science behind it is “old hat”: Space X won their petition, which meant that Blue Origin, had to withdraw the patent claim.

Both billionaires have been public about their rivalry. They’ve even taken swings at each other on Twitter. For instance, in 2015, Blue Origin was successful with its New Shepard launch. Bezos even tweeted about it, calling it “The Rarest of Beasts.” In an effort to rain on Blue Origin’s parade, Musk responded that SpaceX had already done that a few years earlier. After the successful launch of Falcon9 by Space X, Bezos also seized the opportunity to undermine Musk on social media.

More details about the Musk-Bezos feud

In some instances, Musk has expressed his disagreement with the hiring practices of Blue Origin. For example, Musk reportedly Ashleen Vance, his autobiographer, that Bezos had tried to steal talented employees from SpaceX on multiple occasions. According to Musk’s 2015 biography, Blue Origin would offer perks like double salary to lure some of SpaceX’s staff.  According to Musk, this is a rude approach. For this reason, Musk has implemented email filters at SpaceX, ton specific words like “origin” and “blue.”

On multiple occasions, Musk has claimed that Bezos is a “copycat.” One of those occasions was during Amazon’s announcement on internet-beaming satellites. Another occasion is when Amazon acquired Zoox, a taxi company with self-driving services. He also poked fun at Jeff Bezos during the launch of the Blue Moon (a lunar-landing vehicle). He tweeted that adding the color blue to a ball for branding is questionable. He later shared a screenshot of the Blue Moon that had been transformed into Blue Balls in an article from New York Times. “Oh stop teasing, Jeff,” he wrote.

While Musk has been obvious about his distaste for Bezos and his company, Bezos, hasn’t blatantly expressed the same level of distaste for Musk and his companies. On several occasions, he has shared veiled comments about Musk’s ideas and plans. Even though Bezos is expressing his feelings indirectly, he hasn’t shied away from ridiculing SpaceX’s goal to colonize Mars. He considers the idea un-motivating and maintains that his goal of reaching the moon is a far better one. During the Blue Moon presentation, Bezos referred to SpaceX’s as “Far, Far Away”.

The tension between these two companies got even worse in 2020, when they were their designs for Lunar Landers to NASA. The owner of the winning design would be granted the privilege of taking humanity back to the moon in the next couple of years. This created an avenue for these companies to compete fiercely. The winner would get a multi-billion dollar project with NASA. The two companies had about 10 months to present their designs to NASA. The winning design would be used to represent the mission, also known as Artemis. It would be the first mission after the 1972 Apollo17 mission. Eventually, SpaceX won the $2.9 billion contract to build the Lunar Lander.

During his interview with New York Times in July 2020, Musk used the opportunity to poke fun at his rival. At 50 years old, Musk implied that Bezos is too old to make progress at 57 years old. He claimed that Bezos’ rate of progress is slow and he has little time left.

Musk has been heard referring Amazon as a monopoly. When Amazon Publishing Sector rejected Alex Berenson’s book on Coronavirus, Musk seized the opportunity and tweeted about it. He claimed it’s an “insane” situation and that the Amazon monopoly should be dismantled The book that Amazon had taken down was titled “Unreported Truths about COVID-19 and Lockdowns.”  According to Berenson’s tweet, the company had claimed his book is not in line with their guidelines. But later on, Amazon said the book would be reinstated.

In 2020 December when SpaceX put Starship Spacecraft to a test, Bezos complimented them publicly. This suggested that he was softening his stance on the company. SpaceX launches the rocket for a 7-minutes test flight. Unfortunately, it went into pieces during the landing. Despite this eventual failure, Bezos praised their attempts. In fact, he actually publicly congratulated the entire SpaceX team.

Unfortunately, the goodwill Bezos had expressed towards SpaceX evaporated a few months later. That was when NASA announced that SpaceX would be the sole recipient of a $2.9 billion dollar contract for the moon lander. To be more specific, the contract is to land humans on the moon by 2024. Infuriated by NASA’s decision, Bezos took to social media to challenge NASA. They filed an official protest with 50 pages at the Federal Accountability Office. The protest challenged the grounds upon which NASA had made this decision. According to the New York Times report, Blue Origin called this a “flawed” decision. Initially, the contract was supposed to go to two space launch companies. Due to funding limitations, they agreed to award the contract to SpaceX alone. According to Blue Origin’s statement to CNBC, turning the tables on the other companies that were bidding for the contract at the last minute was unjust.

Musk’s tweet, in response to Blue Origin’s formal protest, read “Can’t get it up – to orbit, lol.” He added a photoshopped image of a lunar lander from Blue Origin with its name changed to “Blue Ball.”

Blue Origin filed this suit in August 2020, and the legal proceedings led to a temporary pause on the contract. The lawsuit challenged NASA for improper and unlawful proposal evaluation for this contract. However, Blue Origin lost the case in early November.

Another lawsuit against SpaceX’s Starlink Satellites by an Amazon subsidiary

According to an Amazon Subsidiary, SpaceX had breached the rules in their plans to build more satellites. While this letter to FCC is not typically a lawsuit, it sparked a reaction from Musk. Musk took a swing at Bezos on Twitter. He said it seems “Besos” is retiring early to pursue a career in suing SpaceX. He intentionally misspelled the name “Bezos” in his tweet.

Competition for the top spot as the riches in the world

In 2021, a new element of the Musk-Bezos rivalry has emerged. These two have been taking turns claiming the top spot as the richest person in the world. Bezos has been recognized as the richest in the world since 2017. However, that changed in 2021 January when Musk claimed the spot when Tesla share price increased, thus increasing his net worth. Musk shot past Bill Gates, Zuckerberg, and finally Bezos. In 2021, these two were taking turns occupying that top spot. Today, Musk has claimed that spot with a solid net worth of $255 billion against the $199 billion of Bezos.

Musk’s claims that Bezos is too serious

According to a recent comment from Musk, Bezos is too serious. He added that Bezos has talent as an engineer; however, he doesn’t pay attention to details. As Musk said, “he should invest more time in the company instead of the hot tub.”

It’s clear that the feud between these moguls isn’t about to end. While this rivalry is centered on their space ambitions, there are occasions when they’ve gotten personal. At the same time, their rivalry seems to fuel their ambitions. This is probably why it hasn’t ended for over 14 years. Each of them strives to attain their goals faster than the other. This never-ending race evokes creativity on both ends. Similarly, as a company or startup, you can leverage use rivalry against your competitors to fuel you. When you look at rivalry positively, it becomes a motivation that fuels you to not only achieve your goals but also outdo the competition.

How Pressfarm can help your company stand out from the competition

Are you part of a startup that is launching a new product or service? Just imagine how amazing it would be to let someone else worry about generating publicity for your startup, while you focus on perfecting your product. With a team of professionals who have experience working with brands from different industries, Pressfarm can do that for you! Pressfarm provides personalized public relations services that will help you tell a memorable brand story that will capture media attention and inspire your target audience. We have experience writing press releases that will win journalists over and feature articles that will excite your target audience. We’re also skilled at designing media kits that showcase the unique personality of each brand.