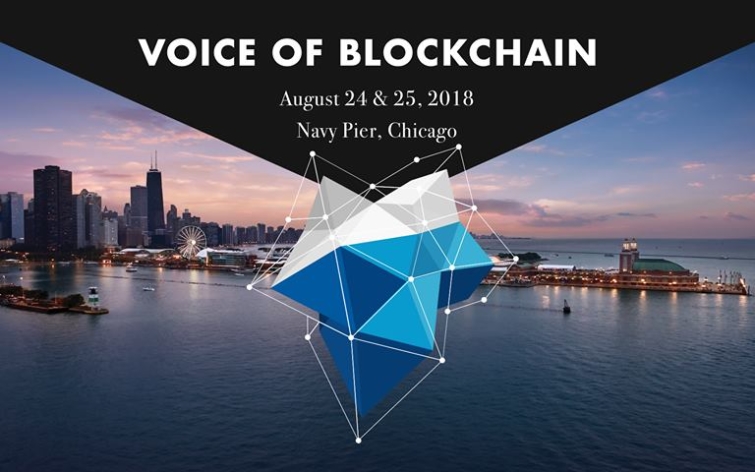 In our weekly interviews with startups, we chat with Joe Hernandez, the Founder of the Chicago Blockchain Project about the Voice of Blockchain event scheduled for August 24th to 25th this week. As he looks forward to the event and prepares to receive speakers and entrepreneurs worldwide, we discuss about the idea behind the event, why Chicago, and how this technology stands in the future in relation to various industries.

The idea was born in October 2017. At that time, it was a nameless conference that had the opportunity to put Chicago “on the map”.

“We saw the regulatory environment in New York and the Silicon Valley cost of living as a unique opportunity for our city,” Joe comments. “As the year progressed, the quality of events declined. The conferences became a double sided market where the speakers were paying to be on stage. We think blockchain is much more than ICOs. It is real world use cases in real estate, healthcare, supply chain, esports, smart cities, and construction. It is the digital infrastructure being built and chosen as a global communication tool. This new internet of value allows us to pay people for contributing to building common infrastructure. It is truly moving us from the paradigm of competition to collaboration,” he adds.

Paul Doherty, CEO of The Digit Group is working on building NEOM, a $500 Billion smart city project in western China. Imagine if Burnham were alive today? How would he plan the city of the future? This group is doing that.

“We are very excited about our Saturday Kickoff conversation between Edmund Moy, the 38th Director of the US Mint and Matthew Roszak, a bitcoin pioneer who recently co-found Metronome, a new block chain based cryptocurrency. Other greats are Pete Martin of Votem discussing the Dept. of Homeland Security’s concerns with online voting, Pia Mancini who was voted a top 100 most influential woman in tech, and Uri Klarman of Northwestern talking about his Metastable funded company, Bloxroute, which is solving the scalability problem for all block chains.”

Block chain technology is growing but millions of people are still not into the whole concept yet. The event plans to bring new people into the “believers” by showing them legitimate, currently functioning use cases and products across industries.

“We have a BUIDL Academy which has classes for everyday people and developers to learn more. The ConsenSys Career Coaching booth will help people find a path and we have heard CoinKeeper will be showing everyone how they can send bitcoin through text… they may even be giving some out to help teach us!”

The world is a better place with block chain. “Being able to represent value digitally allows us freedom from having to fight over scarce resources. It gives us a single agreed upon set of data. This could be currency, but it can also be land titles, or media and IP rights. Most importantly, it allows us to reward people for collaborating to build free open source software. Imagine a future where no government or corporation owns the infrastructure we all share.”

Voice of Blockchain will be a yearly event. “We plan to learn from our first event which is already shaping up to be one of the best ever put together. It is also possibly the largest gathering of block chain for social good projects ever! There is zero fat in our talks schedule on all 3 stages plus the BUIDL Academy rooms.”

The event has more of the top 100 projects from coinmarketcap.com than any conference ever hosted before and it has booked 100 bloggers, podcasters, and Youtubers to cover the event!

Blockchain innovation is happening in finance, healthcare, media, tech, and also education among other verticals. So, Important to know is where block chain has been more assertive and how it will shape that industry in the coming years.

“Blockchain will touch every industry,” says Joe. “The goal is aligning the interest of all the stakeholders. Block chain also allows us to engineer the incentives of each system to best serve the community as a whole. So, it allows incentivized communism and compassionate capitalism. Asking what industry, it will affect is like asking “will the internet affect X industry?” back in 1992. The answer is yes. So, it will affect every industry.”

The Voice of Blockchain is a two-day conference gathering industry influencers, leaders in blockchain, government and business and 5,000 attendees to shape the ongoing conversation on blockchain today.

Brittany Kaiser, Cambridge Analytics Whistleblower, Joe Renz, Iota Foundation & Matthew Roszak, bloq are just a few of the featured speakers. So, If you would like to go and learn about blockchain, register now for $100 off your ticket.

Register here and use “alphacrypto” to redeem your offer.