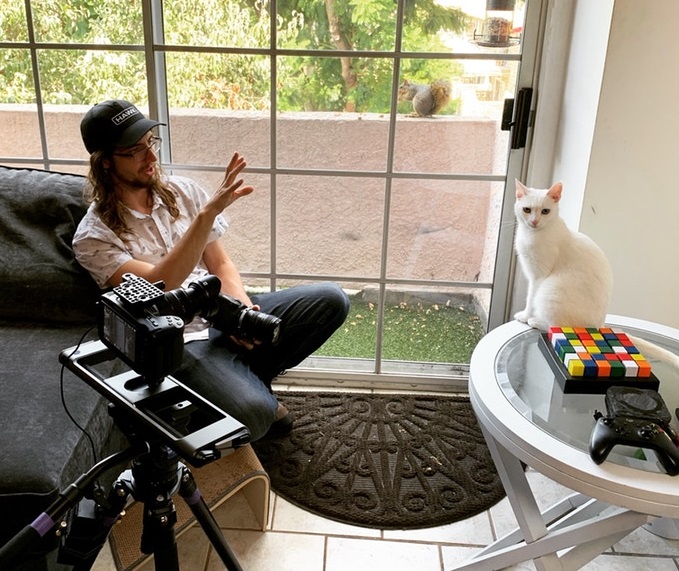 In our startup story this week we chat with the Director of Gray Hat Productions, Mye Hoang about her new documentary that intends to showcase how dads and cats have formed strong bonds around the world to not only become life friends and companions but also a great source of friendship.The film which has been named Cat Daddys is now fundraising on Kickstarter with a goal of raising $30,000 to cater for the production costs. You can check out the campaign here: Cat Daddys on Kickstarter

Mye Hoang talks to us about her aspirations for this documentary and why all cat lovers should care about it especially in the aftermath of losing one of the internet’s most famous cats, Lil Bub, last week.

It is not every day that someone wakes up and decides to do a cat movie. In fact, while we have millions of cat memes circulating around the internet we do not have as many cat films. Therefore, when a film or an idea for one comes up it usually happens to be special and is driven by a certain desire.

Mye Hoang says, “I’ve been fascinated with my husband’s transformation to becoming a cat person when a cat walked into his life quite literally. I thought to myself, well if HE could love cats, surely many other unwitting men could too.”

Traditionally it has been assumed that men have been more attracted to keeping dogs. However, Mye’s husband as with other cat daddies around the world are turning this myth on its head.

She continues, “I also noticed the trending photos and videos of men with their cats – and them being proud of it. Having previously made some short cat films, I thought I could make a full length documentary to profile this trend and the fascination with it. I wanted to tackle other social issues as well such as toxic masculinity, depression, etc.”

Cats are awesome but for some reason men for a long time have not wanted to associate with good things. Being a man myself I would comfortably add this to another of the many fun things men deny themselves because of … well being men. But Mye is changing the story.

CAT DADDIES! WHAT ABOUT CAT MOMMIES?

For a long time, social media has been full of photos of women with their lovely cats. We have seen the cat family, in this case consisting of humans and cats, grow to exponential numbers online. But for many years men have been left behind in that cat craze.

“I think social media has changed the stigma of owning cats, especially for men. It feels like a movement. But the change is slow,” remarks Mye. “And there is still a lower percentage of men owning cats (at least in America), so perhaps a film like this could open more hearts and more homes to pets in need.”

This definitely brings into a dimension a totally different aspect of the discussion. We have several cats around the world that are homeless. You will see them in cat shelters all of them yearning to have a home. It is time that men begin to contribute in a big way towards ending the homeless cat crisis.

The director adds, “What we need for the homeless pet crisis is more loving homes. And to do that, we need to inspire more compassion.”

THE IMPACT OF CAT DADDIES

Documentaries about cats don’t come in plenty, but the cat fan-base is a huge market. To make a successful documentary or film based on cats you need to strike a special chord with cat lovers to help not only with the Kickstarter campaign but also future distribution. The impact has to be clear.

“So part of what compelled me to pursue this idea of making Cat Daddies was that I was watching cat-themed documentaries on Netflix and other streamers until it ran out. There was literally nothing left to watch and the light bulb went off in my head. I am part of the cat fan-base, and so I know that the fan-base wants to watch quality cat content. There has never been a cat-themed documentary that was in the mainstream conversation. I want Cat Daddies to be a celebration movie, an event that cat lovers can attend and show off their cat pride. The subject of men and cats can bring that out in the fan base,” Mye comments.

As with any business venture, challenges abound. Mye says, “The biggest challenge in the production of Cat Daddies is reaching out to some of the cat dads. They are very busy, sometimes working multiple jobs on top of running social media for their cat. And in some cases, their cat’s celebrity is their full-time job and they are having to deal with so many random inquiries while running their cat’s social media and business. It’s been surprising and not so surprising to not get a response.”

Reaching out to new contacts has always been a struggle in almost every industry you can think of. Dedication of the highest order is required in order to get results. The director agrees and adds, “ It takes a lot of time and effort, and I continue to try to get through to the cat dads I want to cast.”

“Every cat is different but for the subjects in Cat Daddies, the companionship is very real. Cats might not be outwardly affectionate to strangers, but they are definitely loving to their owners as can be witnessed in this documentary,” remarks Mye.

One of the goals of the movie is to show how cats can be therapeutic for men in high-stress occupations such as at a fire station, as well as great hiking companions as many cats nowadays are being trained on a leash.

Mye notes, “There are so many personalities within cats.”

Upcoming entrepreneurs who are planning to raise funds through a crowdfunding program should be wary of some of the challenges that business experiences when it goes through this channel.

Mye Hoang points out, “My partners and I have done several crowdfund projects together. Some of the best things to come out of crowdfunding is sometimes not just hitting the goal itself but the contacts and supporters you’ll find along the way. We think every crowdfunding campaign will be the last for us because it is such a full-time job. Our lessons are that you can never start early enough, and there is never a good time to do it. Sometimes you just have to go for it.”

THE FUTURE OF GRAY HAT FILMS

Mye Hoang concludes by giving us a sneak peek into what the future of her production company looks like beyond 2019 and after the crowdfunding campaign, “Gray Hat Productions has a slate of films in various stages and budgets. We are actually developing a mystery thriller that takes place in Japan on one of the famed cat islands. So we hope to bring more content for cat lovers into the world as just one example.”

You can support the Kickstarter campaign by clicking here: Cat Daddies on Kickstarter