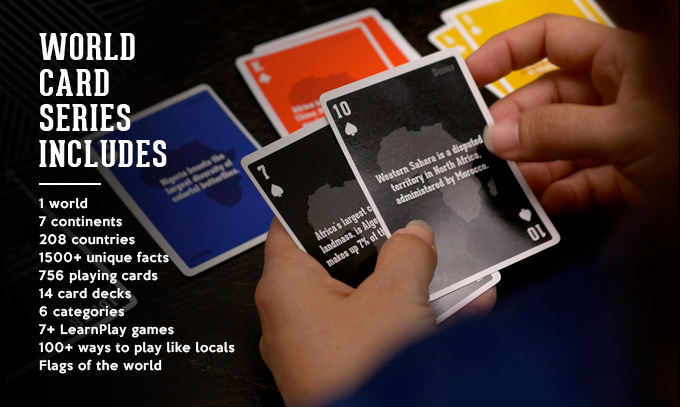 Card game startups are changing how millennials and the 21st century individual learn about the world. As much as social media and mobile apps have taken over people’s time. There is a lot to be found in physical card games. Especially card games that not only serve for play but also educate. Such is the World Card Series game that gives everyone an opportunity to discover the world through creative exploration of over 1500 facts about the people, places, and practices of the world. And it is raising funds on Kickstarter for a full launch, already over 200% of initial funding goal and growing.

In our startup story today, we speak to Joel, one of the founders of the World Card Series. For which he personally developed the world facts-based curriculum.

“During the 2018 winter Olympics opening ceremonies where each competing country’s athletes walked out into the South Korea arena, our children listened carefully to the information presented by the TV commentators, intrigued particularly by the facts of the countries,” Joel states as he begins to tell us about the inspiration behind the game. “That became the inspiration behind the World Card Series. Gamifying world facts for the benefit of our children and all people. We need more intercultural understanding throughout the world, all the time, not just during special events like the Olympics.”

One of the reasons why card games like this one are so interesting is that they give snippets of facts in very digestible amounts making it very easy to want to find out more; which is all the more intriguing reason to play World Card Series.

The cards are organized in packs that the company is calling ContiDecks. The first ContiDeck is Africa, whose pack has fully developed as well as the rest.

“Africa came first alphabetically among the continents, so we started there,” adds Joel. “We quickly learned that each continent has their own personality, including colors and feel that we felt needed to be represented in the design of World Card Series.”

The team of globe-trotting dads and veteran world geography teachers at World Card Series have made a ContiDeck for all 7 continents. These are now being offered at steep discounts and free shipping exclusively on Kickstarter through December 8, 2018.

Geography-based games are plentiful. However, Joel recommends World Card Series owing to its fact-based curriculum to not only be a game. That is played but one that is used as a form of education as well.

“Players will certainly get world geography and world history out of World Card Series. But they’ll get much more through creative exploration of six categories of facts, namely geography, people, cultures, resources, physical features, and fun facts.”

“As we’ve pre-released World Card Series to the different markets, we’ve started receiving reviews and are posting them online here”

“We feel uniquely qualified to produce World Card Series country cards next. Your next destination in a card game.”

As we come to the close of the discussion, startup lessons are always critical to share, and Joel has a few.

“We were uniquely positioned to create the World Card Series, given our respective careers in curriculum development, marketing, design, world travel, and business,” he remarks. “We created an original product that took significant, deliberate time and thought to develop. World Card Series solves a growing problem across the United States and the world: Xenophobia, a fear or hatred of strangers or foreigners or of anything that is strange or foreign.

“We are passionate about what intercultural understanding can do for world peace. Feel we’re at a good starting point that is both engaging and impactful.”

While they solve a major problem of discrimination through gamification, what does your startup solve? As you ponder on that, go to their Kickstarter page and order a set or more for your own geographical prowess. Of course for the sake of a good education game.