The Successful and Failed Marketing & PR Strategies of Joe Exotic, the Tiger King 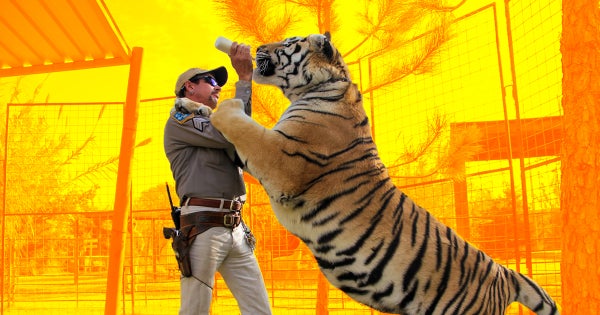 Whether or not you have watched it on Netflix, you have definitely heard and seen things about the notorious Tiger King. I have to admit that I probably would have never watched the docuseries if it wasn’t for someone recommending it to me and after one episode, I was hooked.  It was evidently clear that the message that the docuseries was trying to get across was the feud between the competing businesses and the tactics that were used to undermine each other, which was quite engaging and comical.

For everyone out there who does not know who the Tiger King is, well where have you been first of all and second, let me enlighten you. He is the former owner of the Greater Wynnewood Exotic Animal Park where he was claimed to be the “most prolific breeder of tigers”.  He has definitely dabbled in quite a few things throughout his life including; showman, internet personality, musician, attempted politician and finally convicted felon.  Something that was portrayed quite a bit throughout the docuseries was his feud and lawsuit with Carole Baskin, CEO of Big Cat Rescue.

The feud between Carole Baskin and Joe Exotic was greatly displayed in this series, every thing that one did to the other was reciprocated in the most ridiculous way. However when it came to individual PR and marketing choices, it showed that Baskin used social media marketing and other creative PR strategies to hype up her cause and engage her audience. On the other hand, it showed that Joe Exotic had a very little sense of organization, strategy, or direction when it came to anything he was trying to do. However, some people may argue that even though he was portrayed in a negative light, he understood the fundamentals of digital marketing. Unfortunately, the follow-up after only knowing the fundamentals did not end well for him.

Before we dive into any PR strategies, whether success or failure, let us take a look at his finances and how he got to the point of where he is now shall we? He started his business with trust fund money from a wealthy family member and before he worked full-time at the zoo, he was setting up mobile petting zoos that traveled and toured malls, which is partially where the feud between him and Baskin began because she was writing to malls saying that they should not condone that behavior. I mean, at the end of the day, he was probably making quite a bit of money with the combination of admission fees for all his endeavors, barely paying his employees, keeping his animals fed using roadkill that he found on the side of the road and discarded/unwanted meat from Walmart. Oh and to top it all off, he was big on breeding and would make between $1,500 and $10,000 for hybrid cubs.

But, by the end of the docuseries we see that he was very strapped for cash and one of those reasons is because he spent YEARS in legal drama with Carole Baskin. We see that he brought in help through Jeff Lowe and that worked all fine and dandy for a while until, as we saw in the series, crap hit the fan.

Alright, let us know take a look at the things at the Tiger King has done to try and make a name for himself.

For anyone that has the basic knowledge of PR knows that an important part of having and starting a company is creating a brand identity. It is what sets you apart from your competitors and shows customers who you are and what they can expect from you.

If you have watched the docuseries, you know that Joe Exotic does not fall short of character and “charm” throughout. As mentioned previously, Exotic understood the fundamentals of marketing, but basics can only take you so far.

For the marketing professionals out there, it is evidently clear that there were things that Joe Exotic did that would be considered to be shady methods.  His feud with Carole Baskin definitely overtook everything that he tried to do.

Exotic used quite a few PR techniques to advertise himself, but the one that was probably the most detrimental to him financially and emotional was using blackhat techniques to steal SEO traffic and customers from Baskins. So the whole thing that started this was him rebranding his company to be named “Big Cat Rescue Entertainment”, it is important to note that Baskin’ business is called Big Cat Rescue. He thought that if he did this, the results would be in his favor, but as the wise Bhagavan “Doc” Antle says, “She’s the first choice every time – supersedes all the zoos; she’s the top of all search.”

His attempt to manipulate the system worked somewhat because for some time, but actually thought that they were the same company. For everyone out there that are actually taking PR advice from the wise Tiger King, don’t follow this technique. You might be able to gain traction using blackhat techniques, however it will not outweigh the SEO consequences that you can have if you are actually caught by the search engines. There can be real repercussions both financially and legally as it was evidently clear in the docuseries.

Now, other than shady techniques to gain PR, he also did some things to promote himself and his brand in a “relatively” normal way. Just from the first episode, we see that he fully committed to promoting himself in some of the most outrageous ways including but not limited to his music career, his merch; which included some very interesting undergarments, his radio show; that went out to his “many” followers.

All of us can agree that he is quite the eccentric character, but you have to admit that he definitely stuck to his aesthetic throughout, he did not change who he was in any endeavors he put his mind to which is very important for a PR and marketing campaign. From a basic brand identity stand point, he definitely had his image down.

Let us compare the other basic branding strategies with the actions of the Tiger King.

As the docuseries shows, there were 3 big competitors in the exotic animal game along with other side players and actually purchased animals from Joe Exotic. From the show, it is not evidently clear that he actually did “research” about his competitors but, if taking Carole Baskin’s diary and reading on your radio show is research then he definitely did that. Or maybe traveling to Big Cat Rescue and filming videos about your competitor and making music videos about your competitor supposedly murdering her ex-husband then he researched for sure.

2) Figure out your consumer

The above reviews are actual reviews that I had actually found on yelp.com about Greater Wynnewood Exotic Animal Park. You can definitely see that there are mixed reviews about the place, but that is like everywhere. There are people out there that like these things because if you did watch the docuseries, people like the grandeur of holding tiger and lion cubs, according to the “family man” Jeff Lowe and his wife. As Jeff Lowe so eloquently put it, “ A litte pussy gets a lot of pussy”. So, I guess in this situation it really depends on the type of people that you are trying to attract because the ones that love this type of thing would enjoy it. One person, as you can see in the review, even mentioned the great pizza they had.

Joe Exotic took PR to a whole other level when he decided to run for the President of the United States in 2015. He took America by storm by publishing his first campaign video through DIY PR, which I do not recommend, where he featured his tigers and said some very professional things like “I’ve had some kinky sex, I have tried drugs during the younger years of my life.”

He did the usual presidential campaign merchandise that every candidate does with posters, badges, banners, and in true Tiger King fashion, he also put his campaign artwork on condoms and gave them out.

Despite his highly unorthodox methods and the common perception that he may not be the brightest crayon in the box, his political platform actually did express things that needed to be fixed in his state of Oklahoma like; better state elder care, mental health resources, increasing teacher pay, and criminal drug justice reform. As expected, he did not win the presidency only getting 900+ vote, but that didn’t stop him! Oh no, he is nothing if not persistent. He decided to run for governor of Oklahoma.

In the final episodes, we see that Exotic started becoming more and more paranoid that people were out to get him, and to be fair, he wasn’t wrong. Things started going downhill when he found out that the Feds and the UFWS were looking for him and he hauled ass out of the zoo, leaving it to Jeff Lowe. Eventually, broke and not really knowing what to do anymore, Feds found and him and he was convicted of a murder for hire plot against Carole Baskin and charges for animal abuse.

At the end of the day, he may have been portrayed as eccentric and having a screw loose, but the things he did to promote himself and his brand were relatively commendable. He never gave up who he was regardless of the industry he was trying to branch into, he stood his ground about a lot of things, and for a while his business was doing well. While, throughout his career up until his arrest, he did not get the best publicity, we are all still talking about him right? Whether it is through memes, GIFs, or articles, most of us know about the Tiger King.

Reach out to Pressfarm for help with the following facets of your press coverage campaign:

– Creation of a media kit to send out to potential investors, industry bloggers and journalists

– Get yourself a feature story on Pressfarm and shared across 150k Pressfarm followers on social media.