StartHawk Making it Easier for Founders to Meet Co-founders 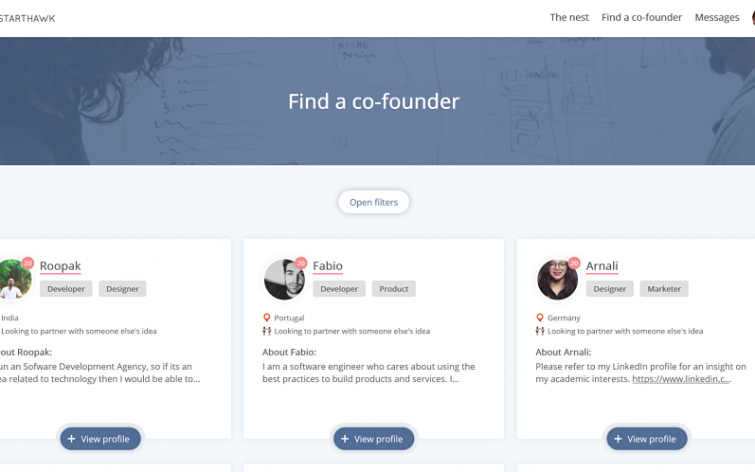 In our startup story today we chat with Ben Liger, the Founder of StartHawk, a startup that is bridging the gap between founders and co-founders.

Ben shares about his inspiration to build StartHawk, and what the journey through this period has been like. We get to look into the entrepreneurship journey of not just StartHawk but some of the early users who have adopted the platform and what that might look like for future users.

As with any new company, the birth of an idea begins from somewhere. Ben says, “Well, I was myself searching for a platform to find a co-founder but found the other options available in the market to be either frustrating to use or fairly outdated.”

It is not an easy space and there have been several other options before. However, most of them are not quite successful in gaining traction and with time become obsolete and exist only as shells of their former selves.

He continues, “I thought the industry could be better and no one else had really stepped up to the plate to provide a better solution yet. We thought and still think that we can do better with StartHawk.”

There have been several founder-cofounder communities that have sprouted up online in the previous years where founders and co-founders e-meet and interact based on their abilities and ideas. StartHawk has to propose value that brings an impact into the space.

The founder remarks, “The big thing for us was always usability. I wanted to make the user experience for this as slick as possible because that’s often what brings people back.”

Most times, entrepreneurs will start with product validation after launch. Nevertheless, with StartHawk and the team that has already been done by the existing competition. Which only leaves the product as a focus to gain leverage. And the user experience is a great part of it as Ben notes, “ As a result of mapping out simple user journeys before the development process, the feedback I’ve had from users is that it’s a dead-easy and intuitive platform to use.”

He adds, “You can access your messages from anywhere in the site with our real-time chat panel for example, which makes navigating / searching whilst still having a conversation very easy.”

Building the platform as a place where founders and cofounders can find one another is great. Even so, Ben wants more from the platform. He wants a place that will be the home where startups live from their sprouting to their growth.

He says, “StartHawk aims to be much more than a platform for finding co-founders. We want it to be a hub for startups. This goal will become more apparent as we launch different sections to the site. For example, we have launched a forum called The Nest where users communicate and exchange knowledge and advice. Every new section that we launch will aim to support and help serve a different need in the startup community.”

A lot of times we see platforms like these focused in the US, or Europe. There are extremely underserved markets especially in South America, Africa, and Asia. StartHawk wants to address that too.

Ben remarks, “StartHawk is international. We did not want to limit our geography to let’s say for example just the USA as there are many successful partnerships that are formed on a remote basis.”

Remote work is becoming the next revolution in work. Startups, and successful ones at that, are run completely remotely. Therefore, the boundaries that formally limited people to work or not work for companies in far geographical locations are totally getting dismantled. Platforms like StartHawk will be integral in fostering remote partnerships. Even so, the biggest chunk of companies still prefers to hire locally.

“However, should the user only be interested in finding people within their locality, they can just apply a filter to co-founders just in their city or country,” notes the founder.

Ben and his team are bootstrapping and growing on a lean budget. Outside of Silicon Valley, this is the reality for most startups around the world. There are no investors itching to slap money on your company until it has proven itself. Ben understands just how tough it can be to be a startup growing on a budget.

“Growth is expensive and time-consuming. As we are currently a free platform, growing at the pace we want to is tricky. We have managed to do well in terms of new acquisitions so far, however, it has been a case of juggling development of new features or marketing the site through link building, SEO etc. We have found that we really have to pick our battles for the time being.” Understandably so.

When on a budget, you have to consider that the finances might not allow you to spend on advertising for instance. All means of fostering organic growth have to be explored. One of those means is by using the internet to get press coverage and features on blogs.

Focus on small victories rather than achieving the bigger picture.

At first glance, StartHawk appears to be utilising the matching system seen in most dating apps. For a long time, people have gotten used to this kind of match-making and looking for a business partner or co-founder shares similarities with dating. For instance, you look for a co-founder with abilities that you lack as a founder.

Ben adds, “I think people are used to seeing this “tiled” approach of listing people. After a bit of user testing, we found it was the quickest and most digestible way for users to quickly find the information or co-founder they want – which ties into our user experience goal of making the site quick and intuitive.”

When an idea strikes you and you need to build a business around it because it solves a problem, you are the innovator. In tech, we have seen many innovators who have various strengths. Many times, some founders are limited in tech abilities and stumble in the process of building the product or totally get stuck.

“I think people do not realize the main advantages of having a co-founder until they come to tackling objectives where they lack experience in such as growth or product development for example,” Ben remarks. He continues, “It is common for people to think along the lines of “well if I get a co-founder then I’ll have to give up a significant portion of my equity” and often that will be the leading factor in them choosing against teaming up with a co-founder.”

This is an argument that has been a common argument for founders who decided to take a course in the abilities they lack which are integral for building the product.

“There’s so much more to think about in terms of the positives of having a co-founder: Mitigation of risk for investors, having someone with complementary skill-sets to you, division of labour, even just having someone to soundboard those difficult decisions with. The vast majority of successful startups have more than one founder. It’s a nice thought to be able to “do everything myself” and for some people that may work but it is often easier said than done especially once the day-to-day tasks start to get too much for one person to handle.”

The growth of a small company presents lessons aplenty. “Focus on small victories rather than achieving the bigger picture,” Ben says. “I mean really small wins that you know you can achieve for that day. One of my wins for today was to successfully complete this interview for example. It may sound basic but, at the end of the day, it’s an achievement that contributes towards the success of the product. Checking even the smallest things off a to-do list helps in keeping the motivation going every day. We all have slumps where we may have an unproductive week or question some of the things we are doing. Breaking tasks into smaller ones has been what’s kept me going.”

We are approaching a new year and 2019 has definitely been a success for Ben and his team. From a successful launch to onboarding early phase users, the future is bright.

Ben adds, “As mentioned we are looking to develop our presence in the startup community. Through the roll-out of new features and services to cater to startup needs – that is the first task. After this, we will continue to do the same but focus the majority of our attention towards marketing. Our thinking is that we want to have a strong product to market in what is already a competitive landscape.”

Enjoyed today’s startup interview? Let us know your thoughts about StartHawk in the comments section.