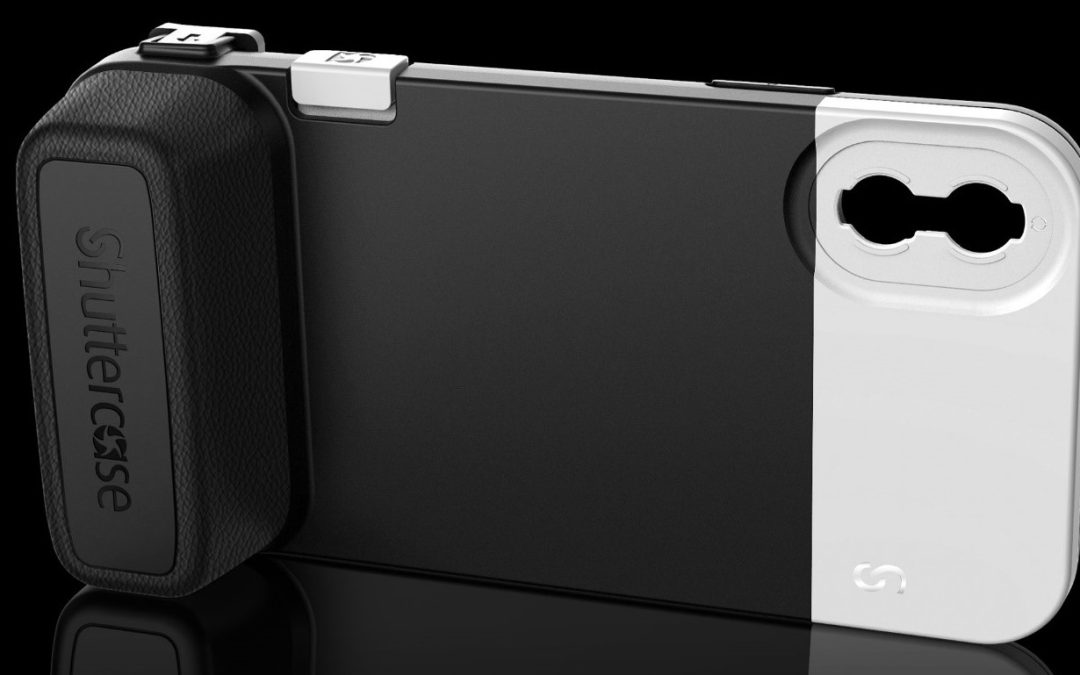 In a field that some would say is already too innovated, Shuttercase has found an edge by solving a mobile photography problem that you didn’t realise you had, until today. As the World’s 1st Modular iPhone Battery Case with a replaceable camera handle, mechanical shutter button and add-on lens mount, Shuttercase enables yfou to hold and shoot your iPhone like a classic point-and-shoot camera.

In our startup feature story this week, we chat with one of the co-founders of Shuttercase, Felix Fan, on the inspiration that brought him to finding a solution for a mobile photography ergonomics problem and his experiences so far growing Shuttercase to become a household brand in the US.

“I was an amateur photographer for years. I used to carry my old film camera Nikon FM3A with Kodak Tri-X wandering on streets all day, and fumble with chemicals in the darkroom all night. However, after becoming the father of two children, I gradually lost those long leisure hours for films. I turned to digital,” says Felix as he delves into the early days of discovering the digital photography space.

Despite having great cameras in Nikon D90-D300S-Df and then latter Ricoh GR family, Felix fell in love fast with the iPhone. It was easily portable, it is probably the thing he constantly had in his pockets and from the very beginning it took great photos as compared to its peers at the time.

“I’ve been an iOS user since the 1st generation launched in 2007, from the iPhone 4, 6Plus, 8Plus, to the X, and now the latest XS Max,” he adds. “Since the iPhone 8Plus, the sensor and algorithm had evolved to be so good that I basically stopped using my old GR.”

Eventually, this Steve Jobs invention became a very close companion. Felix says he didn’t need to enlarge his photos or do any prints most of the time. This eliminated his need for the big cameras and eventually settled on sticking to the iPhone. He remarks, “I found iPhone beat all other cameras in terms of convenience. The best camera in the world is the camera in your hand. In that sense, iPhone is the best camera, for me.”

The best camera in the world is the camera in your hand.

There is no product without fault. As Felix continued to use the iPhone more and more, he noticed the inconveniences that it and all other mobile phones have when taking photos.

“The ergonomics is inferior to a real pocket camera, because phones are designed to function as phones and internet devices, not as cameras.”

There was a lot of fumbling before you get the shot out because of lacking balance as you do the photo taking process. The phone, especially the iPhone, is quite thin and smooth-polished to give you a good grip. When using two hands you are always missing the critical moment, as fast as the camera might be. As such, it was a pain that Felix believed needed to be solved.

“What if there is a way to hold and shoot on the smartphone like my good old Ricoh GR?” he asked himself. This is the question that set him off to making what is probably the world’s first modular iPhone battery case. He asked the question of why no one had made this before, and got into the process of finding out how it would happen.

“In 2016, with two friends Mikael Andersson and Peter Oster, I started the project as a serious startup. We went through 8 drafts, eight versions of prototypes, countless trial and errors, drawbacks, and failures,” adds Felix.

“At some point we thought about giving up, due to the engineering challenges, the extremely high cost, and the unforeseeable market prospect.”

With such a product, developing your first successful prototype is not a simple business. It is hard and it takes work. Even more, for a startup being funded from the pockets of the three co-founders, the engineering department was gobbling up huge sums of money from their budget. They almost gave it all up. And then the iPhone X happened.

“The iPhone X was such a game-changer in smartphone photography that we decided to go all into it. After a whole year’s collaborative hard work, we pulled off the Shuttercase. Now we are shipping worldwide. We made it.”

“There is nothing quite like Shuttercase in the market today,” Felix says. He continues, “If we have to pick competitors, then let’s count in Pictar and Moment battery case.”

Here is a table that would give you a quick comparison between Pictar, Moment, and Shuttercase:

Felix doesn’t hesitate to explain what the table should bring out clearly. He says, “We use a simple mechanical mechanism to trigger the camera.  No Bluetooth, No Ultra-sonic. Our engineers are from a mechanical background, and we want to build a whole mechanical system in the age of AI.”

A fully mechanical system means that the Shuttercase is able to work regardless of whether your Bluetooth is on or not, that is one step cleared out of the way.

Additionally, he adds that since there is no digital connection with the iOS system, you don’t need any extra App to start using Shuttercase. You could use Apple camera App (which he regards as the best) or multiple third-party Apps to shoot directly.

“So, instead of consuming more power by using Bluetooth, we actually charge your iPhone with this extra battery embedded. We’d say Shuttercase with iPhone camera App could deliver the functions of Pictar + Morphie, but at half of the combined price.”

One of Tim Ferris principles about product design is to make sure that the product is as simple as possible, and that the customer has to go through as few steps as possible to make it work. In Shuttercase, the user doesn’t have to do any gimmicks to get the product to work, no Bluetooth, no ultra-sonic, and to add onto that the battery case comes with an extra battery to power your photo taking exploits.

“It is faster than Pictar and Moment to initiate the shooting process because all you need to do is to swap open the iPhone camera App, within 3 seconds. This is very important when you are out shooting in the street. You should never miss any critical moment.”

Like most world first products, the beauty is usually not only in the product itself but in all other extensions of services and products that would sprout out from the invention. The Shuttercase is no different. “With this patented modular system, we welcome other accessory makers to make add-on extensions, for example, game handles, video/mic slide-on components, etc.  There are many possibilities.”

Shuttercase is made for photographers, geeks, social media influencers, Vloggers, constant travelers who don’t want to carry the big DSLR, or just anyone who enjoys taking photos by smartphone.

The company is using Facebook ads and reaching out to Influencers for marketing. They are sending samples to iPhone photographers (like Jack Hollingsworth / Austin Mann）and Vloggers (like Jeven Dovy).

“So far we’ve received passionate responses. The pros love Shuttercase. In the next few months, you will see more reviews and sharing on social media. We are actively looking for chances to enter the brick and mortar stores. One example: we will be listed in the largest pro camera gear store B&H photo-video in New York soon next month.”

The iPhone definitely uses the same concept as all other mobile phones. We would expect that as Shuttercase gains more ground, it could be coming to your android phone as well.

“I’m a die-hard Apple user.  I’ve been using iPhone since the first generation.  It’s just natural to start the business with something I truly enjoy. Our next big move is to develop for Pixel phones.  Our team already started the design process for Pixel 3.”

In the near future, the company is expanding into more mobile phones battery case. Additionally, Felix hopes that Shuttercase will become a popular open-platform gear system with more partners making add-on extensions based on their design.

“We plan to add a game handle, as an independent accessory in addition to the current replaceable camera handle. We will partner with lens brands and start selling lens bundle in our store, in the next several months.”

He continues, “We have a vision, that with the ever-evolving smartphone sensor, mobile photography will become not only ” popular and easy,” but will deliver a “WOW ” quality that eventually matches the current 135 format cameras. And we are determined to make a valuable contribution to that process.”

As we cometo the conclusion of our feature story, the shuttercase co-founder advises new founders and entrepreneurs.

He says “We made many mistakes. All of our team members are from an engineering background. None of us knew much about marketing or sales, and we wasted much money and time there. But we managed to pull it off.  I won’t elaborate on suggestions like ” understand your audience ” or ” do market search and find your niche”. They are essential, but well explained already by many.  For me personally, I found the three points below vital to succeed:

1). Make a plan on your spending

You will almost certainly spend much more than your plan. We spent five times more than our original budget, mostly on engineering.  Make sure you have enough cash left for marketing when you build something that demands substantial investment from your own pocket.  For any startup, cash flow should always be the NO.1 concern.

Shuttercase is made out of the love for the art of photography.  In the early days, we were baffled by all kinds of drawbacks. We spent 30% of our budget on the engineering process alone building the first three prototypes that were not working at all. Many a night, I woke up in terror of total failure. Then, with the collective hard work of Mikael, Peter and other engineers, we conquered the engineering challenges bit by bit. We wouldn’t have pulled it off without that burning desire to make a difference in mobile photography.  It just takes time and effort.

3). Running a business is like a marathon, not a 200 meters sprint.

Just keep running and eventually you will arrive at your destination.”

The story of Shuttercase is inspiring. A story that is quite telling. Aspiring entrepreneurs can learn from this story to build out any invention in their minds. Of course, we would be happy to help bring it to market with our strategic public relations efforts.

Every week we publish a new feature story like this one about brands and startups that are working with us and using our platform for media outreach. Shuttercase is now working with Pressfarm to build out their PR outreach. If you would like to see past startup stories, click here. Until next time, stay tuned and get yourself a Shuttercase while at it!