How Does MTGA Work? – Draftsim 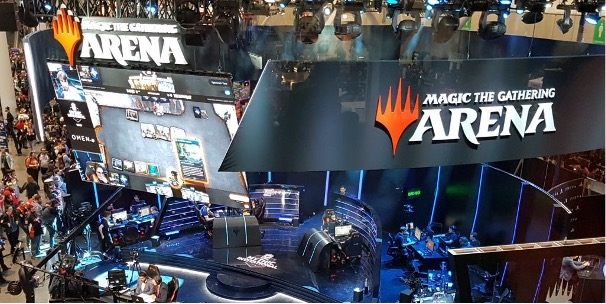 Everything You Need To Know To Get Started On Magic: The Gathering Arena

Magic: The Gathering was the first trading card game and was made in the early 1990s. Since then it has gained popularity all over the world, and the company that launched the game began to buy other magic-themed gaming systems – including D&D (Dungeons & Dragons).

Magic: The Gathering Arena is an online take on the game that was launched by Wizards of the Coast at the end of 2019. The platform allows players to play MTG with others all over the world in real-time.

In this article, we are going to share with you everything you need to know to get started with Magic: The Gathering Arena.

What Is Magic: The Gathering Arena?

You play as a planeswalker who is traveling through the Planescape (or multiverse) battling other planeswalkers with your army.

In MTGA, you buy and collect cards that are put together into decks. The decks act as the army that you use to battle other players.

In MTGA, you can be put into a random battle, you can take on AI-controlled decks as part of the storyline, or you can enter tournaments and battle against other players for big prizes.

MTGA is free to download and there are many free things you can do in the game. You can earn in-game currency by completing your weeklies and dailies – but if you want to compete on a larger scale then you will need to invest in some cards.

The good news is that MTGA is a lot cheaper than paper cards from MTG. Almost half the price in fact.

Is It Similar To Magic: The Gathering card game?

Magic: The Gathering is a card game started by a group of friends who wanted a more portable and travel-friendly board game that they could play together.

After a few years of planning, they eventually came up with Magic: The Gathering – the first trading card game. There had been trading cards before – particularly in the world of sport – but they couldn’t be used in the way MTG cards could.

Magic: The Gathering Arena is based on the card game, but can offer a few more features that just cannot be done with a card game.

If you have paper MTG cards, you cannot convert them into MTGA cards.

How To Play MTGA

Now that we have learned more about Magic: The Gathering Arena, it’s time to learn more about how to play the game.

If you have played the paper version of Magic: The Gathering then you know most of what you already need to know about playing the game. But if you want a little more information or know nothing about MTG or MTGA then keep reading.

If you want to win your MTGA matches then you need to have a good deck. But, how do you do that?

Well, there are five things that you need to be aware of when you are making a deck – your theme, your land, your creatures, your spells, and the synergy of your deck.

The more cards that you have, the better decks you will be able to build. Later in the article, we have a list of ways to get over 100 cards for free.

Decks can be themed around colors; but also around species, vehicles, planes, biomes, and types of magic.

The land is the most important type of card in your deck. You need land to generate mana and you cannot summon creatures or cast spells without mana. Make sure that you have enough land in your deck – about 40% of your deck should be land.

Creatures are the soldiers in your army that you summon to fight for you using mana.

You can use mana to cast spells. Spells can do almost anything – like bring dead creatures back to life or steal your opponents’ for your own creatures for yourself.

Synergy covers how well the cards in your deck work together. Types of decks that have really good synergy are undead decks and elf decks.

Once you have made your decks it’s time to put them into practice.

In MTGA, you can battle against random people online or your friends. You can take part in ranked matches and large tournaments. So, you can also take part in in-universe events.

You will pitch your deck against other players. If you have made a better deck (or sometimes it’s just luck) you could win your match and earn yourself a series of rewards.

When you win a match, you will be rewarded by the game. These usually come in the form of gold – the in-game currency.

You can also get rewards by completing your daily and weekly challenges. These change every day or week and could be something like “play 40 land cards” or  “win 5 battles”.

You can join tournaments and wager gold. If you win enough games you can make a good profit, but if you lose in the early rounds, you will lose a lot of gold.

How To Start Playing MTGA

The first thing you will need to do is to log onto the Magic: The Gathering Arena homepage and download the game. Once it is downloaded, you will want to install it.

If you are playing on your phone then go to your app store and download the game.

When you open the game for the first time you will be prompted to create an account. This is free to do, and if you wish you can have multiple accounts.

Once you have set up your account, you will notice that you have a couple of beginner decks. Then the tutorial will quick in and talk you through everything you need to know about the game.

You can even install this MTGA Assistant that will help you to improve at the game and offers a lot of the features that players with MTGA had. You can only do this if you are playing on a computer or laptop.

How To Get Free Cards On MTGA

If you want to be successful on MTGA then you need to build good decks.

While there are a series of rules you should follow to build a good deck (you can see those above), you can’t actually build decks unless you have enough cards. Cards can be bought and they can also be one.

You can also find a bunch of codes online that will give you free packs of cards.

We have gathered a list of codes below that you can enter in the Redeem Code box on the Store tab to get some free card packs:

The codes above will give you 152 free cards in total

MTGA is always releasing more codes that will give you access to free card packs. The best time to look for these codes is when a new storyline starts or there is some big in-game event happening.