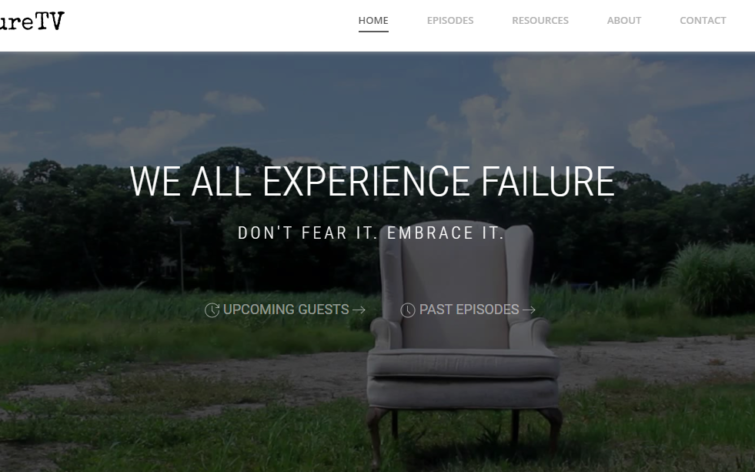 Kray Mitchell, at a conference about failure, spoke to lots of people and there was one major realization: that people were hesitant to venture into their dreams because they were afraid they would fail. At that conference, it struck Kray that so many people have refused to chase their dreams and are living second-choice lives because of the fear of failure. It felt like a no-brainer for him to find ways to encourage anybody to go for their dream thing with confidence that even if it were to fail, it would still be progressive growth and a part of the journey.

He started a podcast known as Failure TV. The podcast now attracts thousands of listeners who are embracing failure as a part of growth. We caught up with him at Pressfarm to have a chat about this idea and where he envisions to take his startup.

Every human being at every point in life has failed at least once. There is no way to go through life without ever once failing in something even if it were a tiny sprint or a short test. For Kray, he tells has, he is not an exemption to failures, “In my own life, there are too many to recollect.”

“I think I was just too stubborn to accept failure. Most memorable though was when I started my first eCommerce business in 2008, with the intention to go brick and mortar. After 3 years of trying to get funding, I packed it in. But I learned so much about a lot of different things that have shaped my career choices and focus on commerce,” he continues.

There is the failure that teaches you a lot more, impacts you way more, and leaves so many lessons. It doesn’t have to happen to you, we learn from the failure of other people, businesses, and companies too. In our own terms, we are calling it the ‘favourite failure’, and the Failure TV founder has one.

“My favourite failure that I know is the story of how Corning developed Gorilla Glass way back in the 50s due to a failed gauge. It basically sat on a shelf until Steve Jobs came along needing an ultra-thin and strong material for the iPhone screen. Really cool story of how things can go wrong, but turn around even 50 years later. You never know what is going to happen!”

Like many people, there is something that shapes who you become. It shapes what you do and how you do it. Companies and startups are no exceptions. The company cultures we see from day to day in every industry and the people we all grow to become have been shaped by so many things in our surrounding.

“I honestly have to give credit to many of my peers, co-workers and friends who pushed me to make Failure TV happen,” says Kray. “I came up with the idea while a bunch of us were having drinks at a conference. We were talking about failure, what it had done to us in our lives and careers and I just said: “I should do a Podcast…”. When I started looking into it further, I found inspiration with people like Edison, Dyson, Oprah and Ford. They did things that they were told weren’t possible, because they didn’t give up. When others said no, they said “I don’t accept that” and made it happen.”

The people that conquer their fears and especially the fear of failure have some commonalities. There are differentiating factors that determine whether someone rises up from failure or drowns in it.

“The biggest commonality I see in all my guests is their resiliency and mindset. When something negative happens, they don’t allow themselves to be sucked into the “woe is me” mindset,” Kray notes. “It’s hard, but they fight past it to find the lesson and carry that knowledge forward to the next thing.”

The upside to being open-minded about failure is that the thought of ‘am not done yet’ becomes a prevalent push in your mind to get you up and running again.

“Many have said that after something they thought was the end, they found something greater around the corner. None of the people I have talked to have gotten where they are through success, they got there through failures and learning.”

“Good question, I am never too sure what all to expect!” exclaims Kray.

It is easy to see why. There are always different guests, with different stories. The lessons are different too.

“I have a great series of guests lined up through the fall and into winter,” he adds. “We’ll be hearing some great new stories, advice and insights from real people to inspire and motivate.”

“Everybody that I have talked to have their own unique stories, and everybody has been amazing.”

As we press for a more specific answer, Kray bulks and adds, “I can’t say that I have any favourites specifically, though Olga Kay has such an amazing and inspiring story. From the circus to YouTube to CEO, you just don’t hear too many stories like that.”

The ideal goal of Failure TV is to show that the journey of life across various verticals is full of stumbling blocks. There is no perfection because failure becomes a synonymous part of the equation. With all the roadblocks, Olga’s story inspires Kray very much. Not less than the other stories he has featured, but still a favourite nonetheless.

“It makes you believe that anything is possible!” the Failure TV entrepreneur concludes.