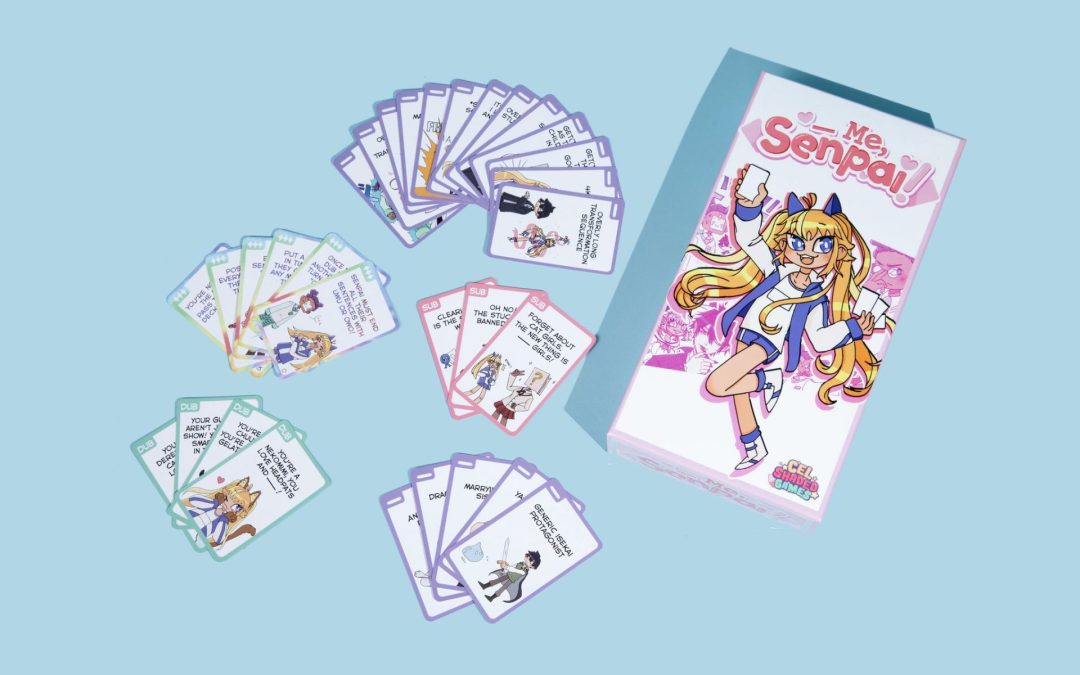 _Me Senpai! is an anime game designed by anime fans for anime fans of all levels

The game focuses on roleplay and strategy rather than pure luck of the draw, making each play session unique and unpredictable.

Unlike most other anime games that go out of season as soon as a new game is released, _Me Senpai! is designed to be timeless. Given that it draws on the creativity and knowledge of the players, _Me Senpai! evolves with these players. The game guarantees endless fun for both seasoned anime fans and people who are exploring the genre for the first time.

Most of the time, anime games are daunting for newbies who are venturing into the anime space for the first time. Cel Shaded Games is changing all of this with a game that you can play at any level of knowledge, and a game that helps you learn as you play.

_Me Senpai! is designed to entertain anime fans of all stripes – from the hardcore OVA collector to the seasonal anime watcher. It doesn’t matter whether you’re familiar with anime tropes or not. Either way, you can play _Me Senpai! with 3 to 7 other players and create wacky characters and scenarios.

The team behind Cel Shaded Games

The comic artists, writers, and developers at Cel Shaded Games have experience in writing for Fortune 500 companies, illustrating comics, writing novels, and developing games. What’s more, they’ve spent a combined 50+ years watching anime. Drawing from their experience in the anime space, this team has brought us a fill-in-the-blank card party game with a twist.

For starters, the fact that they’ve incorporated roleplaying and strategy elements into the game already offers a refreshing change for anime players. The roleplaying and strategy elements also increase replayability. Beyond that, they make it easier to win even if you draw a bad hand. What’s more, the cards come with illustrations to help newbies learn anime tropes, so no player is at a disadvantage. Finally, _Me Senpai! is designed to help players create pieces of art that they can display in their collections for years to come.

“Before we developed _Me Senpai!, all the members of our team dreamt of a game that we could play with friends or with random strangers at conventions,” says Cel Shaded Games co-founder Kat Jackson. “We agreed that the perfect game would be one that you could play with other people without having to worry about clashing tastes in anime. Inspired by this vision, we designed _Me Senpai! to be more than just a game. This game is also supposed to double as a piece of art that anime fans can show off as part of their collections.”

_Me Senpai! is the perfect card party game because it cuts across genres and appeals to a wide group of people. Whether you’re looking to pass the time or teach your friends some anime tropes, _Me Senpai! will offer hours of fun for you and your group. With _Me Senpai! the team at Cel Shaded Games has brought the world an anime game for everyone – a game that offers high-quality art, accessible humor, and collectibles.

_Me Senpai! will be launching on Kickstarter later this Spring. To find out more about the game, visit the Cel Shaded Games website.

Cel Shaded Games is a company dedicated to creating high-quality, collectible anime games. Whether you like shoujo or shounen, we have something for you.

No matter where you are on your anime journey, we have a product that you’ll love. We take a different approach to anime games – they don’t need to be something you hide under the bed or toss out when the new seasonal anime comes out. We want our games to be as artistic and impactful as the shows that inspire them.