The Best Time to Send a Press Release 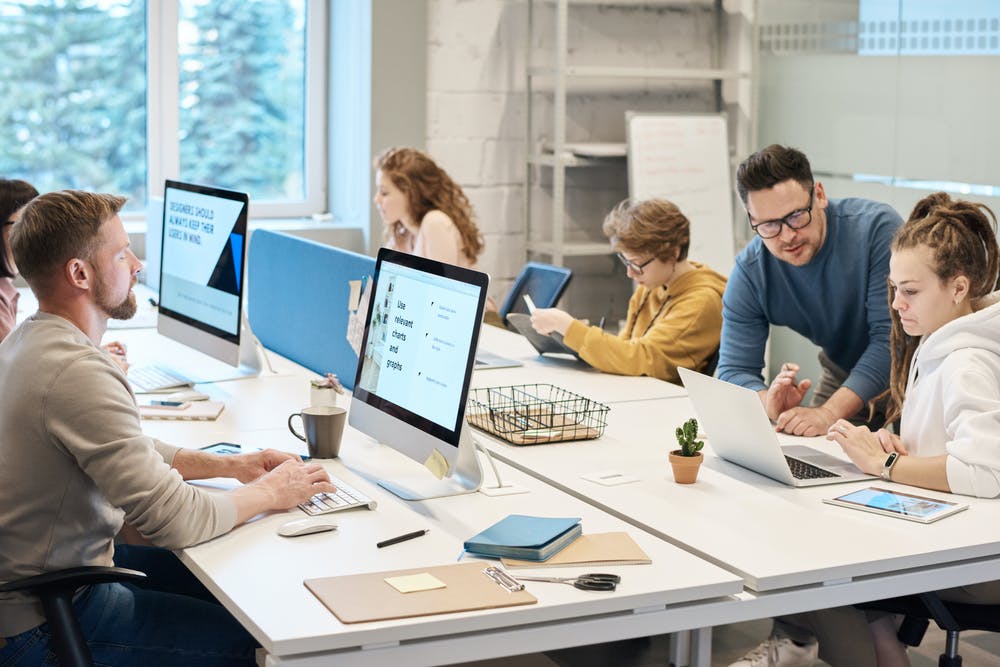 So you’ve followed our press release writing guide to a tee, found media contacts to pitch your story to, and now you’re all set to hit send. Before you click that send button, look at your watch. Make sure you’re not sending your press release at a time when it’ll drown in a flood of emails.

Why you shouldn’t send your press release on a Monday

Given that Monday is the first day of the week, it’s also the busiest day of the week for most people. This is no different for journalists, who start their week by struggling to catch up with a whole weekend’s worth of emails. On a Monday, they’re typically also trying to get ahead of news stories based on events from the weekend.

For these reasons, it’s important to steer clear of Mondays when you’re scheduling your cold email pitch.

Why you shouldn’t send your press release on a Friday

If Monday morning is a bad time to send a press release, is it better to get ahead of the Monday morning flood of emails by sending yours on Friday? No, please don’t do this.

Friday is a bad day to send your press release because journalists are usually racing to meet end-of-the-week deadlines. On a Friday, your story is unlikely to be prioritized unless it’s headline news. And that is if the journalist you’re pitching to has had time to check their emails.

It’s true that the traditional structure of the work week has changed. With many journalists working remotely, the divide between the work week and the weekend is getting less distinct. Be that as it may, most journalists still have competing priorities to deal with over the weekend. This is especially the case for journalists who have families.

It is therefore not a great idea to send your pitch during the weekend either. Emailing a journalist on the weekend will only result in your pitch joining the pile of emails they have to catch up with on Monday. This dramatically reduces the chances of your story being read. 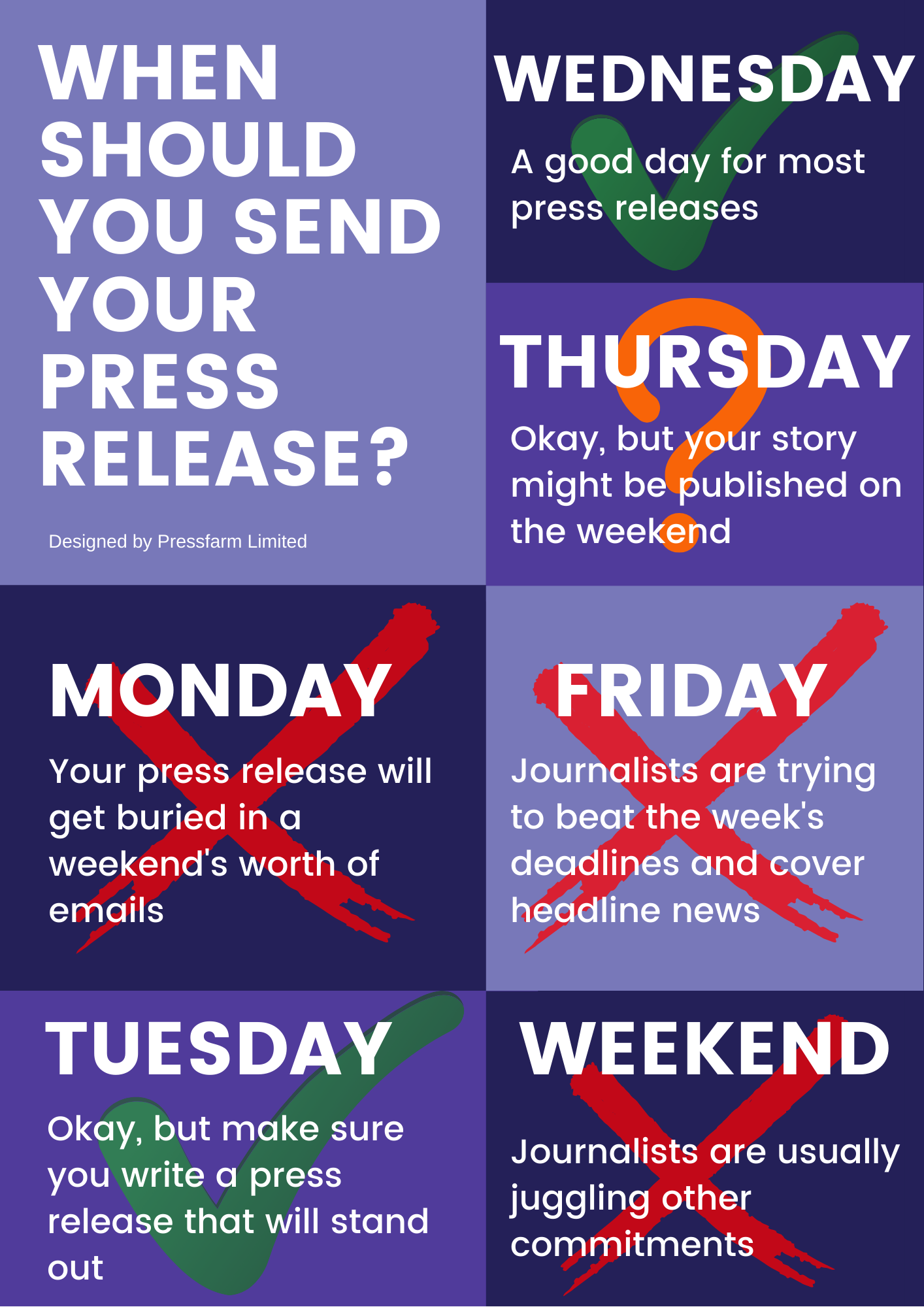 Okay, so what is the best time to send a press release during the week?

Unfortunately, the answer to this question isn’t simple because there is no one time that will work in all cases. In order to answer this question properly, let’s go through each of the three days left one by one.

Tuesdays can be a good day to send your press release to journalists. Ideally, by Tuesday, they’ve already caught up on the pile of emails that had accumulated over the weekend. However, you are likely to be competing with all the other brands who know this. For this reason, you will need to make an extra effort to ensure your press release stands out.

Wednesday is a good day because it’s not as busy as Tuesday. Nevertheless, this doesn’t mean you can get away with doing the bare minimum on Wednesday. You still need to perfect all the elements of your press release to make sure that the journalist you are pitching spots it in their inbox, opens it and reads it to the end.

Alternatively, if you don’t send your press release on Wednesday, you can send it on Thursday. Nonetheless, the lead time for working on a story can sometimes be a few days. This means that your story might be published over the weekend. Is this a bad thing? Not always.

This simply means you need to be clear whether you are pitching to consumer media or trade media.

What about the best time of day to send a press release?

The recommended time to send a press release is either between 8 am and 9 am, 2 pm and 3 pm or at 8 pm Eastern Standard Time. Having said this, your press release will stand a higher chance of being read before 5 pm when offices close.

With these time slots in mind, you should also avoid sending a press release exactly on the hour, since many brands target the hour. For example, instead of sending your press release at 9 am, try 8:45, 9:05 or 9:15. Doing this will help you avoid the peak times for press releases. With this strategy, your press release will have a better chance of standing out.

Why time zones are important

You might be emailing a journalist in Europe at 2pm your time, without realizing that it’s dinnertime in Europe. This is bad news if you’re hoping the journalist will read your email before morning.

In order to avoid making a mistake like this, it is essential to double-check the timezone of your media contacts before you send your press release. If they are based outside the U.S., then it is important to make sure you are sending your email during the same recommended hours in their local time.

One thing that’s easily forgotten while doing media outreach is the effect special seasons and industry events can have on your success rate.

It is common knowledge that pitching during a public holiday isn’t a good idea. You should avoid sending a press release the week of Christmas, unless you have timely news related to the holiday. Similarly, the journalist you’re pitching to is unlikely to have their nose buried in their emails on New Year’s Day.

Did you know that industry events can also affect the success of your press release pitch? For example, you shouldn’t pitch a tech journalist during Black Hat. The journalist will probably be networking and wandering around exhibition halls instead of sitting in front of a computer looking through their emails.

If you’re pitching the tech journalist above because your brand will be involved in Black Hat, then that’s another story. You should go ahead and send your pitch. At least one month before the event, that is. This gives the journalist ample time to share your news and build publicity for you before the actual event

Pay attention to past engagement with a journalist

Is the journalist you’re about to email the same journalist who you successfully pitched just last week? If this journalist has just written a story about your brand, then it’s unwise to ask them to write yet another story so soon after the last one. While you want to be seen as a reliable source of information, bombarding the same journalist with one press release after another is not a good idea.

Likewise, if you’ve pitched a journalist before and they replied to reject your pitch, then you should ask them how to tailor your pitches better for them in the future. Getting that information beforehand will help you later, when you are sending the next pitch to them.

Pay attention to the organization’s practices

Just as it’s helpful to know how a journalist likes to be pitched, it’s also important to know the best practices of the media organization you are sending your press release to.

What kind of pitches do they prefer? What is their lead time? Answering these questions will help you craft a good press release and send it at the perfect time.

Sending a press release isn’t a one-time thing. Consistency in the future is just as important as getting the timing right the first time. If you send your press release at the perfect time but the journalist doesn’t write a story about you, don’t give up. The next time you have a story to pitch, send another press release.

Once the journalist realizes you are a reliable source of consistent and valuable information, they will start to see you as a trusted news source. In time, they will start picking up your press releases and publishing stories about you.

Having said all this, if you’re considering tucking your press release away and forgetting about it just because it’s not the perfect time, don’t do this.

Sometimes you have an urgent press release that is newsworthy and timely. Likewise, on some days, you absolutely don’t have time to send your press release later on. In this case, you should go ahead and send it as soon as possible.

It is always better to go ahead and send your press release. After all, you didn’t work so hard on crafting the perfect story so it could sit unread on your computer.

As we just said, sometimes you just have to close your eyes, hit send and hope for the best. Let’s talk about how to make sure your press release will stand out, regardless of what time you send it.

In order for your content to be memorable, you need to highlight the value your story has for your target audience. How does your news help society? Will the product or service you’re launching solve a common problem. Talk about this and your audience will read the press release attentively, from beginning to end.

Instead of just assuming your audience will go to your website for more information, tell them where to go. Including a call to action is the best way to encourage long-term engagement from your audience.

If your open rate is low, you might want to tweak your strategy in the future. In addition to timing, you can incorporate the above elements to help your press release email stand out.

Over to you – when is the best time to send a press release?

At the end of the day, there is no hard and fast rule for the best time to send your press release. Depending on who you ask, the best day can range anywhere between Tuesday and Thursday. If you ask about the best time, you’ll get an even wider range of answers. As we said previously, there is no single answer to this question.

Having said that, there are definitely things which you shouldn’t do:

And things which you should do:

But at the end of the day, your industry, your location and your target audience could all have an effect on the best time to send press releases.

For this reason, you will need to rely on your best judgment to determine the best time to send your press release. Past data regarding the performance of your press release emails can also help you figure out which times work better for your brand.

Some media outreach tools can help you collect relevant data about the performance of these press release emails so that you can adjust your strategy accordingly. For example, you can find out the optimal time to send email pitches based on your own data. You can also see which journalists have opened your email.

Do you need help writing a press release that will capture a journalist’s attention? Check out our packages and let us worry about writing your press release.