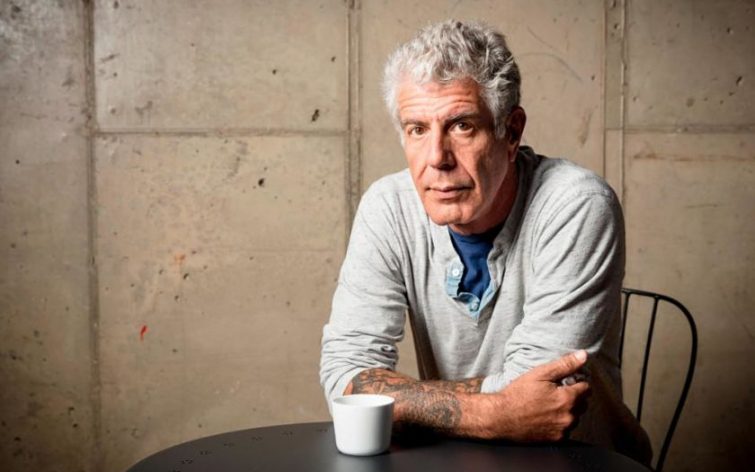 As Tony Robbins once said, just because you listen to somebody, it doesn’t mean you have to take their advice. Even if you attend a seminar, read an article, or watch a video, and 99% of it is made up of useless easy answers, you can still benefit from the 1% that actually made sense. Even if it is all nonsense, you can reaffirm your grip on what is right by listening to people who are very wrong. Maybe this article “Anthony Bourdain Definitive Guide to PR and Marketing for Entrepreneurs” will open new doors and reinvigorate your efforts, or maybe it is full of stuff you disagree with, nevertheless the only way you are guaranteed to learn nothing is if you click off this page. Read on and enjoy a few lessons from Anthony Bourdain.

A Brief Introduction to Anthony Bourdain

Anthony Michael Bourdain died in June 2018. He was a world-famous author, travel documentarian, chef, and TV personality. What does such a man have to offer in terms of how to market a product or service, or how to create a serviceable PR campaign? He actually has very little to offer on the technical subjects; for those sorts of things, you will have to consult your college textbooks. What Anthony has to offer are a series of tips on the final stage of PR and marketing. This article offers advice on the surface issues and on content creation.

Bourdain was a man who cultivated a public TV persona to great success, and who was also successful as a writer. You may be unimpressed with the fact that he wrote books after becoming a celebrity. After all, if a woman can sell a book after sleeping with ex-president Bill Clinton, and if cast members of the ‘reality’ TV shows “Jersey Shore” and “The Only Way is Essex” can sell books, then any TV celebrity can do it. However, Anthony’s books were not cheap “tell-all” biographies. He sold books on food, biographies, and fiction. He successfully and “consistently” marketed himself both as a TV personality and as a writer, which is no easy task.

Anthony Bourdain was in favour of correct English, but he understood the need for personality and style over correct grammar and word use. He wrote his books with great word use, spelling, and grammar, but he understood the negative effects of over editing. If you make every sentence correct up to the highest English standards, then your work will read more like a textbook than a piece of useful and/or interesting content.

Key Point – Understand, know, and love the rules of English grammar, spelling, and word use, but be prepared to flaunt the rules from time-to-time if it gets your point across. Do not sterilise your work, do not make it too clinical, and keep it as useful or entertaining as possible.

Anthony really captured the issues of our day with this tip. He often commented on the overuse of hype and pretence on the internet. He was very aware that people were tired of headlines such as, “These Pictures Will Blow Up Twitter” or, “See Why Nobody Will Hire XX Again.”

Bourdain didn’t market himself or his work with pretence. He didn’t do what Miley Cyrus did by appearing on talk shows with stars over his nipples. Anthony took a more long-term approach to marketing his books. For example, his book named “A Cook’s Tour,” was frankly a little boring. It is one of his books where you really have to be a lover of food to care enough to reach the end of the book. Yet, he didn’t call it, “Find A Perfect Meal or Die,” nor was it called, “My Last Attempt to Find the World’s Greatest Meal.”

Both names would have somewhat explained the content of his book, but he didn’t sell his books using hype or pretence, which is why his book is so highly reviewed. Consider how many people would have torn his book to shreds online if he had marketed it as anything other than a chef looking for food. An exciting name may have sold more books in the beginning, but sales would have dropped off sharply after disappointed readers created an online backlash.

Key Point – Using hype and pretence will only sell content and services in the short term because such methods often create damage that affects the seller in the intermediate and long term. Favour long-term success, drop the hype, drop the pretence, and keep it simple.

Anthony Bourdain was not a nice man in real life. He actively attacked anything that he thought would upset others. He joined the “Me Too” campaign and went too far so that real victims dare not come forwards, he openly attacked meat-free food, and even hated Henry Kissinger. Anthony’s hate-filled life is probably what drove him to suicide, but you wouldn’t know he was so hate-filled from his books. He had a charming image on TV, a nasty image in real life, and a light-hearted image in his books. Three different personas existed, and his two successful images/personas were self-cultivated and engineered. Your marketing and PR efforts may do the very same thing.

Anthony Bourdain’s books are easy to read because they are light, they are humorous, and they do not take themselves so seriously. In real life, outside of the limelight, he was a very bitter and hateful man, but his writing takes itself so “unseriously” that it removes the burden of emotion from the reader.

Anthony Bourdain was also able to do this in his books by not taking himself so seriously. There is almost a feeling/atmosphere of levity when you read his books, so that any uncomfortable passages, or even any racist parts, are washed over as almost-jokes. This image he created with his writing may have been why his comedy books also worked so well.

​Key Point – Your PR and marketing content doesn’t have to represent your real self as a person or brand. Your marketing content (be it written, visual, audio, or video) can have an atmosphere and life of its own, but it becomes more user-friendly if it is light and maybe even funny.

Cultivate Your Own Style

In PR and marketing terms, you need to understand how diverse and broad this tip really is. Do not bulk your target audience into a single-large group. Segment them and drive your campaign to their door. So long as you do not alienate the different segments, you will be fine.

For example, you are going to have many facets to your marketing campaign, and one of them may be the publication of short promotional images on different social media networks. The images you post on Facebook do not have to match the pictures you post on Google+. Facebook is mostly made up of children and young teens, with the rest of their users being mostly women. Google+ is made up of mostly people who are 30+ and it has a far higher ratio of men. This means you should cultivate a very different style of images for Google+ than the images you post on Facebook.

You have to be careful not to alienate your consumers if you create a different style for each segment. For example, you may push your eco-friendly policies on Facebook with claims that you recycle perfume, and you may push your Eco-friendly policies on Google+ with claims that you recycle the hooves from the wild boars you hunt. If your young-female demographic were exposed to your Google+ campaign, you may lose them. It would be better to promote your wine-recycling policy on Google+ rather than something that may alienate another of your market segments.

Key Point – It is wise to cultivate a brand either for yourself or for your company, but you may also cultivate your own style for each facet of your marketing campaign. Your kicky-kitsch YouTube adverts may have a very different style to the sombre banner adverts you place on torrent websites.

New Experiences Give You Creative Juice

It is not difficult to see where Anthony pulled this tip from. After all, he has done more traveling in his lifetime than most people could do in five lifetimes. Here is a man who has found plenty of new experiences, so it stands to reason than his tips on creative motivation are correct. Anthony wrote plenty of books and produced quite a lot of fresh and original content while he was on the TV. The many new experiences he enjoyed may have quite conceivably made the job of content creation a little easier.

Actively seeking new experiences may have a positive side effect too. As a brand, if your PR team is actively seeking new (work related) experiences within the boundaries of the law, then they may find new market demographics and may even find gaps in the market. It pays for a PR and marketing team to look beyond what is trending and what is in the news.

Key Point – Have your PR and marketing team seek out new work-related experiences, areas, niches, and markets. Broaden the range of their research and it may help to make them more creative and maybe more motivated.

Don’t Be Afraid to Push Beyond the Boundaries

A tip such as this is feel-good fodder. It is an easy answer to spoon-feed the fans of Anthony Bourdain who didn’t know what sort of execrable man he was in real life. Yet, if you look at his actions rather than his words, his life may have served as a better example than the words he spoke.

Anthony could have spent most of his career as an occasional TV chef, but he experimented with many types of TV shows and some of them were successful. He could have stuck to writing recipe books, but he also wrote fiction, he wrote biographies, and he wrote comedy books. Some of his books were successful, and some were not, but if he had stuck with what was safe, then he wouldn’t have experienced the extra (and more long-term) success that came with his dabbling in other genres and mediums.

​Key Point – Try new things and experiment a little more. Do not be confined by the conventional notion of experimenting within a company or marketing/PR department. What is tried is not limited to the role of the department.

Anthony Bourdain was a very different man in real life compared to the persona/image created within his books and the person/image created while on TV, and that fact alone is very useful. Anthony created two different brands that worked through an audio-visual medium and through the written word, and your marketing & PR team can do the same for your company by following the advice on this article. In addition, do not underestimate the sheer weight of work that he had to put into building his brands. He may have looked calm and dignified on TV, but that was merely the vision of the duck floating across the water. Look under the water, and you see the duck frantically paddling against the current. Anthony may not have publicly claimed that working very, very hard is the key to success, but he wouldn’t have gotten anywhere without it.