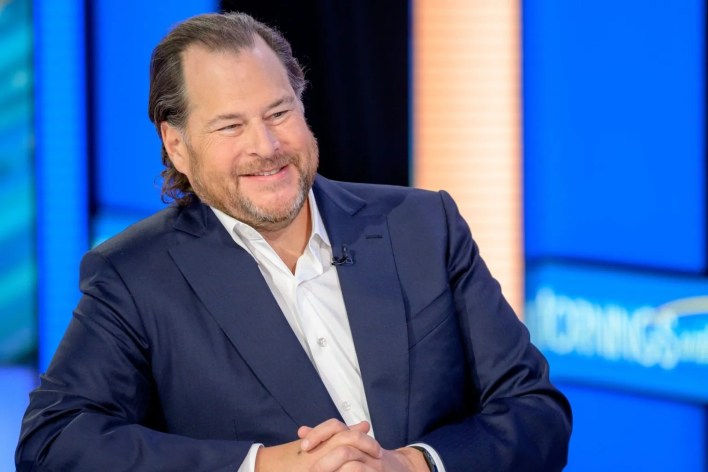 Computing billionaire, internet entrepreneur, and philanthropist are the three most common titles used to describe Marc Benioff. He’s a self-made man who prides himself on always being open to employee feedback and learning from his mistakes. Last year, he was named a top CEO in the Employee Choice Awards by Glassdoor. Even stars such as Matthew McConaughey have described the CEO’s leadership as ‘inspiring.’

In this article, we will look at the highs and lows of Bennioff’s career and how his reaction to the lows allows him to ride the financial highs.

Marc Benioff has the kind of career trajectory most people only dream of. After starting his first company at 13 (which he describes as his only failed business), he was making enough from royalties at 18 that he was able to pay for college. Ever the entrepreneur, he would go door to door asking neighbors if he could fix their antennas or CB radios.

His first business sale came from software he created on a computer from RadioShack called ‘How to Juggle’ and sold for $75 – an indication of what was to come. At 15 years old, he created Liberty Software. He built and sold games for the Atari 8-bit machine based on his previous success. A year and a half later, he started earning $1,500 a month, enough to support him through his Bachelor of Science in Business Administration from the University of Southern California.

Upon graduating, Benioff joined Oracle as a customer support assistant, and was eventually named ‘Rookie of the Year’ at 23. During this period, Benioff met Apple employee Guy Kawasaki. This encounter resulted in a summer internship where Benioff got his first taste of a technology start-up – he never looked back.

Still a lifetime resident of San Francisco, Benioff now sits on the World Economic Forums board of trustees after being named their young world leader in 2015. A regular fixture on top giving lists from Forbes and The Chronicle of Philanthropy, Benioff is a leading example of an ethical businessman and how you can do good with your money. In fact, he’s donated over $600 million to worthy causes.

Between 2010 and 2014, he donated $300 million to UCSF Children’s Hospital, with $50 million ringfenced to fund research on premature birth. In 2021 he pledged $300 million to plant trees and fund ecologically-focused entrepreneurs. Additionally, in 2019, he donated $30 million to the Center of Vulnerable Populations to study the impact of homelessness, housing, and health. Benioff has always maintained that his business is a means to help.

Benioff’s philanthropy isn’t only monetary. In 2015 Benioff stopped Salesforce employees from traveling to Indiana because of the Religious Freedom Restoration Act. Later that same year, he reviewed salaries to make sure men and women were paid equally. In 2018, he criticized tech execs for hoarding wealth and not doing more to help the homeless in San Francisco. More recently, in 2021, he offered to relocate any Texas employees after the abortion law was passed. Always adding more string to his bow, Benioff has recently purchased Time Magazine, in addition to Slack, the working app that got famous during the pandemic.

Widely credited for changing the face of software, Salesforce was one of the first companies that allowed customers to develop their custom applications using the Salesforce architecture and cloud. Salesforce was founded with one goal: the end of software. With this in mind, Benioff was open to experimenting with lots of different business strategies. He was convinced that if Salesforce delivered software via the internet, it would be a much cheaper resource for companies to access.

Using a subscription-based model rather than a licensing model as regularly seen in technology, Benioff could provide more affordable service to businesses while achieving a regular monthly income stream (something a licensing model doesn’t allow). They also invested in new technology, a cloud where you can access and store your files from any computer anywhere in the world.

While this no longer feels like news in 2022, when Salesforce was founded in 1999, most people transported files via CD-ROM and email. The subscription-based model was derived from the journalism industry; Benioff says he always looks at innovations in other sectors in order to determine whether they are viable in technology. This is a titbit of advice that Benioff says will change the way you look at everything.

Salesforce’s next step is releasing its new AI product, Einstein. Benioff has been giving the product rave reviews, saying they were able to develop the software quicker and to a higher standard than previously believed. Constantly pushing the bar in technology and elsewhere keeps Benioff ahead of his competition.

Small companies can be agile. A customer complaint comes in, and it can be immediately raised with the CEO, hardware breaks, and the engineer is a phone call away. As businesses grow, avoiding bureaucracy should be your priority, says Benioff. Keeping the customer at the forefront of any business venture is paramount. Benioff started his tenure at Oracle working in customer service. After many department moves, he found himself in product development.

The lack of communication between customer service and product development shocked Benioff. How can a team be expected to create something for a user they know nothing about when they cannot even find out what they think? The users calling in to customer service to complain offered the perfect opportunity for learning and change. Benioff suggests that Salesforce’s success is due to its company-wide obsession with making customers successful.

As Salesforce holds the title of the fastest company to reach $10 billion in annual revenue, this advice has already been tested. By handling 5 million transactions a day, over half being API transactions with useful customer data, Salesforce is fast becoming industry standard.

Salesforce achieves 4 million hours of volunteerism, has donated over $150 million, and runs 40,00 nonprofits and NGOs. Benioff explained, “we made the decision a long time ago that business is a platform for change and that if we could do that, we could build a business that gives back at scale.” Benioff isn’t only driven by monetary giving. He’s actually the developer of the ‘1-1-1 model’, commonly known as the 1% movement, where companies pledge to give 1% product value, 1% equity, and 1% employee hours to struggling causes and communities.

In 2018 he also backed a call for CEOs and top executives to pay more taxes on profits and wealth. What inspired Benioff’s philanthropic business outlook? After working at Oracle for 13 years, he went to his boss and said he didn’t feel good and wasn’t enjoying his job; in response, he was told to take a 6-month sabbatical. After traveling to Hawaii and India Benioff didn’t feel much different until an ashram told him, “in your quest to change the world don’t forget to give back.” Benioff took this information to heart and never went back to Oracle. Instead, he decided to start his own company with a core set of values that would mean no employee ever felt the despair Benioff had encountered after working on the hamster wheel for so long.

Benioff’s philanthropic reputation precedes him but, unfortunately, he’s been challenged on this by his own employees. In 2017, two of Benioff’s best female executives arranged a meeting in his office. These senior women asked Benioff why he paid his female employees less than his male ones.

When asked if he believed in equality, Benioff replied that he did. Moreover, he had been working for three years to create a culture of equality at Salesforce after realizing that in many meetings, the number of women in the room equaled zero. Considering Benioff had spent his career building a fair and equitable business, both in pay and impact, he was surprised by the accusation. However, after some investigation, Benioff found this was true, highlighting ‘unconscious bias.’ In the process of the ‘purchase of over 60 companies’ Benioff had also bought their culture and payscale alongside their technology.

Benioff emphasizes Salesforce’s core values by explaining, “nothing is more important than our trust with each other, customer success: success with all our customers, and innovation: the ability to improve our products.” Benioff added equality to these core values and made a commitment to upholding them constantly. By doing so, he showed his female employees that he was committed to their fair treatment. Benioff then spent $4 million investigating and closing the gender pay gap at Salesforce.

In 2015 Benioff stopped company travel to Indiana after the religious freedom act was passed. This was particularly impactful as Salesforce is a significant technology employer in Indiana. In 2018 Benioff criticized other technology CEOs for not doing enough to help the homeless population in San Francisco. After the recently passed abortion ban in Texas, Benioff has said Salesforce is willing to relocate any employees out of Texas upon their request.

From an early age, Benioff showed an entrepreneurial spirit. His lessons, learned from breaking the rules, making mistakes, and prioritizing customer success, helped him get to billionaire status. Even so, having this much money and being known for your philanthropy and social activism is a feat.

Having graduated from the University of Southern California with a degree in business administration, Benioff sits on the board of trustees, inspiring the next generation of business leaders. Benioff was also appointed co-chair of Bush’s information technology committee.

“There is no finish line when it comes to equality,” says Benioff. Over 700 companies have adopted Salesforce’s giving model, including Google. With billions in the bank and brands like Google changing their business practices to follow Benioff’s lead, it is no surprise he is hailed as one of the leading CEOs of the tech industry. He deserves his 2012 feature on Barron’s best CEO list and his more recent title as CEO of the year in 2020. We should all draw inspiration from Benioff. After all, the rules of business and philanthropy are waiting for us to rewrite them constantly.