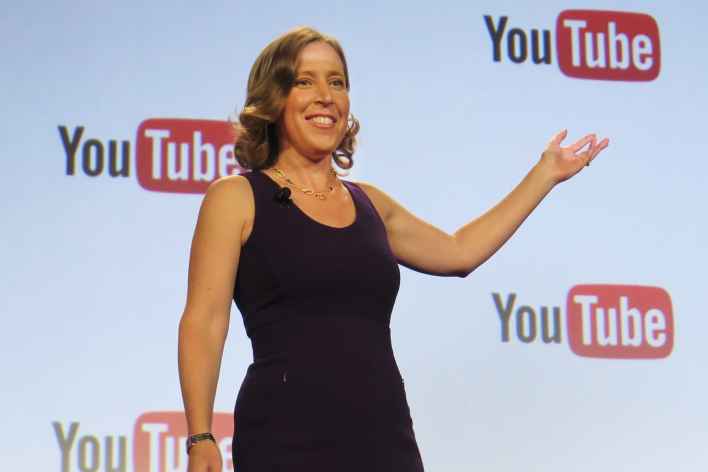 Susan Wojcicki is part of a new, invincible generation of female entrepreneurs and businesswomen from various industries. While there is currently a long list of women who have become successful in their fields Wojcicki has made a name for herself with her work at YouTube.

One of Susan Wojcicki’s most notable successes throughout her career has been being the motivation behind Google’s acquisition of YouTube in 2006. As the company’s 16th employee and first marketing manager, Wojcicki has grown alongside the business she supported. She’s actually transformed YouTube into a streaming titan with a net worth of over $90 billion and the title of second-most-visited website online.

In addition to pursuing her career, Wojcicki also champions parental leave programs for her employees and the IT sector as a whole. She is currently ranked #18 on Forbes’ list of the 100 Most Powerful Women in the World.

When asked to identify the turning point in her life, Wojcicki responds with the phrase “finding technology after earning a humanities degree.” Although Wojcicki may have discovered technology later in life, she has always been an entrepreneur at heart.

Her first foray into business came when she was still only a child. She started off by selling ‘spice-ropes’ door to door and quickly turning a profit. Wojcicki has come a long way, leading previous projects like AdSense which won her the Google Founders’ Award. She’s also earned recognition for her work with Google Analytics and Google Doodles. While she already has her hands full, she still finds time to inspire and fight for the new cohort of women in technology.

Prior to working at Google, Susan Wojcicki grew up on the Stanford campus. The fact that she grew up surrounded by excellence is not surprising given all that she has achieved. Add to this the fact that she graduated with honors from Harvard in 1990. Wojcicki had planned to go straight into a Ph.D. and a life of academia. Nevertheless, after taking a computer science class her senior year, she discovered a love of technology. She got her Master’s in Economics from the University of California, Santa Cruz, and her Master’s in Business Administration from the UCLA Anderson School of Management in 1998. After this, Wojcicki started in the marketing department at Intel, determined to pursue her passion for technology.

She then moved to a new position as a management consultant for Bain and Company. Here, a chance meeting with the founders of Google changed her trajectory and the history of the internet forever.

If you didn’t know where Susan Wojcicki started before she joined Google, now you know. Let us now look at some mistakes she made. We’ll also talk about the lessons she learned along the way to make her the successful businesswoman she is today.

1) Get in on the ground floor

Susan Wojcicki played an even more prominent role in creating Google than she gets credit for. In fact, she rented her garage in Menlo Park, California, to Sergey Brin and Larry Page, who developed Google Search. Wojcicki initially only thought of the duo as tenants helping her pay the mortgage. Thanks to their proximity, Wojcicki caught up with the duo regularly and learned how to use the product. She even used it to help her solve problems in her management consultant job.

A few months later, the site went down for the day and Wojcicki found herself unable to complete her planned work. When she realised how heavily she relied on the site, it dawned on her what a game-changer Google could be. As a result, she joined the friends and became their 16th employee, Google’s first marketing manager.

This prestigious title also meant that she helped develop Google’s famous logo and many projects that turned out to be pivotal to the company’s continued success. An early example is AdSense, a revenue-making marketing tool where businesses can pay to run ads on customer-matched websites. This tool dramatically increased Google’s advertising potential, mainly contributing to increased ad revenue which was over $95 billion by 2017. While the ads are solely maintained by Google, the revenue is split between the publisher and Google itself.

Wojcicki was awarded the Google Founders’ Award for her contribution to the company. She’s also been recognized as the brains behind the Google Logo, as well as the Google Daily Doodle.

The impact of the Daily Doodle

The Daily Doodle has been a conversation starter across the world. The Doodle team creates 400 Doodles a year. 50-100 are animated, and 12 are fully interactive. These Google Doodles give a human face to the technology giant and help Google connect with consumers on a daily basis. Overall, Wojcicki added over ten revenue streams to the company during her tenure.

Wojcicki honed her ability to capture and communicate a vision when she started bringing engineers into her circle and creating pivotal projects. Shared Doodles were a genius way to get people to share the company logo. The linked companies can enjoy benefits like a quarter-million hits a day or Amazon jumping your book 377 places up the bestseller list. Wojcicki also co-created the Google image search with engineer Huican Zhu. These successes ensured that Wojcicki was a shoo-in for control when a new Google Video department was created. While Wojcicki struggled to generate traffic to the video site, she encountered a new video website that fascinated her kids. After some investigation, she encouraged Google to buy the 18-month-old company. This company boasted 8 million views a day, a profitable decision, generating $15 billion in 2019.

Wojcicki says the lesson here is always to stay open to criticism and learn from those who are doing it well. Let’s imagine that Wojcicki had instead dug her heels in and refused to admit that YouTube was generating more traffic with a better design and customer experience. The video-sharing platform would not be under the Alphabet umbrella. In 2021, the company’s paid subscribers surpassed 50 million and the company reported over 100 billion hours of gaming content watched on the platform.

Google has Wojcicki’s children to thank for YouTube. Beyond that, Google employees have her children to thank for introducing maternity leave at the company. Wojcicki was five months pregnant when she joined Google, making her their first pregnant employee. As a result, she paved the way for working mothers at Google. In 2008, the company announced an increase in paid maternity leave from 12 to 18 weeks and paternity leave of 12 weeks. They recently extended paid family leaves to 24 weeks.

Thanks to their policy on family leave, the number of women who left Google dropped by 50%. This data showed Google that the extra cost was well worth the return on investment. In her personal life, Wojcicki is a working mother of 5 children, and offering women a balance is one of her priorities. This balance is something she practices as well as preaches.

Additionally, between 6 pm and 9 pm, Wojcicki doesn’t check her email, allowing her to switch off entirely. This strategy has two benefits. For starters, Wojcicki gets to refresh her mind. She also has to ruthlessly prioritize throughout the day to achieve this goal. This makes her more efficient. She’s become a powerful symbol of a working mother at the c-suite exec level. Her success instills a sense of safety for working mothers and companies alike.

Wojcicki penned an article for Time magazine in June 2022 advocating for the extension of flexible working-from-home hours for new parents during COVID. Leading by example, she used the op-ed to announce Google’s policy of offering three months of working from home for any new parents, demonstrating that employee health is essential to Google.

These issues will become increasingly important. This is primarily since women with college degrees in the workforce who were parents to young children increased during the pandemic. Wojcicki shows again how she is ahead of the curve when spotting profitable business trends. Under her leadership, YouTube’s percentage of female employees has risen from 24% to 30%.

3) Be agile in your response to criticism

There are always issues when a business grows too fast, especially when consumers can freely upload content without checks. YouTube has come under its fair share of criticism around content guidelines, and this issue has resurfaced and been dealt with many times. In 2019 after an issue involving children, Wojcicji disabled comments on videos involving children. Later in the year, she created a system where creators had to flag their videos as family-friendly.

After a second scandal, YouTube updated its harassment policy to ban content that ‘maliciously insults’ others. The basis of this can be any qualifying characteristic, including gender, race, and sexual orientation. In response to repeated issues, Wojcicki hired 10,000 video moderators and implemented an AI system to widen the department’s reach. In 2019 alone, this team made 30 changes to the platform.

Over a billion Youtube users upload 500 hours of content every minute. This new process removed over a million videos in 6 months, with 75% removed without a single user viewing the video. This update is especially important as YouTube has announced its next venture into children’s learning. After the pandemic hit, the market for homeschooling opened up tenfold. YouTube is constantly updating its privacy rules to keep children as safe as possible on the platform. However, this is not a cut-and-dry issue, and each update comes with fresh concerns that could impact people’s freedom of speech. Keep in mind that YouTube is the internet’s second-largest website. At the same time, Susan Wojcicki is considered the ‘gatekeeper of the internet.’ These combined factors mean these companies wield large amounts of power.

While her roles at work and at home are demanding, Susan Wojcicki has shown no sign of stress. In fact, she has recently been called ‘the most measured person in tech’ by the New York Times. Wojcicki is calm and measured in her manner and leadership style. She’s refused to bow to public pressure and delivered every update of YouTube’s guidelines in her characteristic measured manner.

If Wojcicki had to sum up her philosophy with one piece of advice, she would say, “I don’t follow the rules.” This summary may come as a surprise. However, in hindsight, a woman who decides to buy a company she discovered via her children and is putting constant pressure on the technology world to hire women is not someone who follows the status quo.

Throughout her career in marketing and product management, she’s earned many accolades. These include recognition as the most important person in advertising in 2014 and the most powerful woman on the internet in 2015. Her career-defining moment of acquiring YouTube on the ground floor before transforming it into the 2 billion user juggernaut it is today takes talent. Wojcicki notes that talent is just hard work and lots and lots of failure. Failure that you derive lessons from.

Are you a rising entrepreneur? Here’s how Pressfarm can help

Are you in the process of launching your own startup? Just imagine how amazing it would be to let someone else worry about generating publicity for your startup, while you focus on perfecting your product. With a team of professionals who have experience working with brands from different industries, Pressfarm can do that for you!

On top of taking care of your content creation, we can help you find the perfect journalists to cover your story. For this reason, we give all our clients access to our media database of over 1 million journalists across different niches. With this database, you can forget about having to comb the Internet for journalists every time you have a story to pitch. Check out our packages and let us help you tell a brand story that moves your target audience and inspires action.