10 Reasons Why Dropbox Succeeded in a Competitive Market 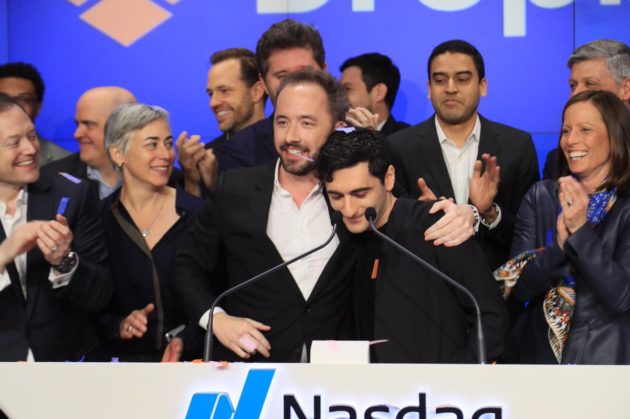 In a field dominated by brands like Microsoft, Apple and Google, Dropbox dared to dream big. They immersed themselves into a competitive market; a market that was filled with tech giants. Yet they managed to build a product that was adopted by millions and built a company worth the $10 billion valuation they have today. How did they do it? What were the reasons behind their success in a field where most new startups have failed?

The team at Dropbox accepted that they were a small company, and they remained so, for a long while. Dropbox kept its team very small. Before their first round of external funding, they bootstrapped every function of the business. The co-founder and CEO, Drew Houston, grew the company with very few employees. By 2014, the company had only employed 500 people since its inception in 2007. Due to the increased competition and need to scale into other markets, they recruited 700 more employees, giving them a team of 1,200 employees by 2015. The company currently has 2,323employees.

Despite starting out with few employees, Dropbox scaled fast. Between their launch date in 2007 and 2011 (when they achieved stability) they had grown to 100 million worldwide users. Between 2011 and 2020 they have grown to 600 million users. Out of these, over 14.3 million are paying subscribers who generate revenues upwards of $1.66 billion.

While the first phase of growth wasn’t as remarkable as the second phase, it was still a remarkable scaling pace for a new company in the cloud department. Especially considering the founders had no experience and had never done this before. Their first phase was a core foundation for their second phase indicating that they were going in the right direction. It’s very clear that their think-small-scale-fast mentality from the lean startup methodology played a big role in their success.

When Dropbox launched in 2007-2008 they had the Minimum Viable Product (MVP). That’s a very skinny product without enough meat on it, but just good enough to show you the idea behind the product. And people loved it. The most important part was that the early Dropbox users were able to provide feedback to the founders who would take this feedback into consideration to fine-tune the product further. It is that feedback together with the optimizations and new features that have made the Dropbox service better.

Ultimately, your MVP provides the perfect opportunity to build a product which your target audience will appreciate. If you want to develop a product which people will happily pay for, this is a great approach to take. In order to benefit from your initial product, it’s important to figure out how you will receive feedback from your early users.

Some brands design feedback forms, or send their clients surveys to fill. On the other hand, there are brands that prefer a more personalized approach. For example, some brands call their clients to discuss how the product is working out for them. Others invite their clients out for a one-on-one lunch meeting so that they can discuss the product face-to-face. Whatever approach you choose is up to you, as long as you remember that your initial product provides the perfect opportunity to build what your clients want to see.

When Dropbox was marketing its company, most companies within the same space didn’t see any need to market their cloud platforms. When I personally heard of Dropbox I was so happy because I thought it was a new idea and I was very young by then (15 years old in 2008). I felt a connection with Dropbox long before I’d even heard of Google Drive, iCloud or OneDrive. The marketing was early, and it was done right, albeit mostly by word of mouth.

Unlike those days when startups struggled to find marketing avenues and platforms, today startups can use Google and Facebook advertising to run campaigns and hit the road running immediately after launch.

In addition to these advertising services, there are many PR agencies that can partner with brands to generate positive publicity before launch. The team of PR professionals at Pressfarm is skilled at crafting a memorable brand story, and creating unique content for startups in North America, UK and Europe. From writing press releases which journalists will read, to writing feature articles that are published on industry blogs, Pressfarm can give your brand the publicity it deserves. Sign up today and let Pressfarm worry about crafting the perfect PR strategy for your startup.

Dropbox was offering 2GB storage space when it first launched. 2GB was a lot of space to get on a cloud platform for free back then. Free stuff always wins people over. They made the platform free for users like me who didn’t need to store a lot of things online at the time. I embraced Dropbox because I had access to all the features on the platform even with this storage.

It didn’t bother Dropbox that the several million users who signed up to use this 2GB of space weren’t paying because they were aiming to attract as many users as possible and then up-sell more services to businesses. This approach sent a clear message to the users that these freemium customers were just as important to the company as their paying customers. Offering free space was such a simple strategy, but it helped build an audience of millions to which it could then market its paid subscriptions. In fact, many of their paying clients converted from the freemium model in order to get more storage space.

5. To get more space, invite your friend

One of the reasons why Dropbox didn’t spend a fortune on marketing was because the paid marketing wasn’t their most resourceful investment. What made Dropbox grow into a viral trend was word-of-mouth marketing. Users spread the word about Dropbox to their friends and families. People sent invitation links to their friends who also sent them to someone else just to get more storage space on the platform.

It was a clever digital marketing strategy. Increasing their user base in this way was the best thing to have happened to Dropbox because they grew to 100 million users in the first 4 years, and a good percentage of that came from telling people “Invite your friend to Dropbox to earn more storage space on top of the 2GB you already have.”

The integration across all existing platforms was done so well it just worked and felt right. People are great fans of “difficult things made easy”. Dropbox gave them exactly that.

If you had Dropbox on your Linux machine you could get these same files on your MacBook synced up-to-date. If you are at home working on files on your Windows PC then leave the house and you need to check these files on transit in a bus or train you just check them out on your Android phone. As long as you have an internet connection, everything will be synced and up to date.

Dropbox made integration across devices and operating systems so easy that people got so used to it and made Dropbox a part of their daily lives.

Early seed funders of Dropbox included well-renowned venture capital firms like Sequoia Capital and Accel Partners. These were very impressive names to have on your startup portfolio as a company. They have all the connections you need including positive relationships with media outlets. They could call upon any of their media contacts if you needed some publicity.

Their experience with startups made them very strong partners for Dropbox because they brought something more than funding to the table. They brought ideas and advice that went a long way in making Dropbox the giant it is today.

The whole system on which Dropbox was founded involved these elements:

This is just what customers and businesses needed. Dropbox made it very easy for teams in a company to collaborate. It was just a matter of putting files in a folder and sharing that folder with members of the team. This level of collaboration made businesses get attached to Dropbox because it was just too simple.

9. Prioritizing employees just as much as customers

The hiring process at Dropbox puts more emphasis on the team mentality of candidates than anything else. Dropbox’s COO, Dennis Woodside, says that they expect two things in potential hires: a team-oriented mindset (We, not, I), and a very detailed answer on the role the candidate played in a specific project.

They also understand that employees cannot produce 100% of the objectives assigned to them due to various reasons. However, Dropbox still expects the staff to hit about 70% of their goals. They do frequent goal reviews that involve 6 weeks of serious sprinting to meet the set objectives before the break when these goals are to review.

10. Deadly execution from the start

It is important to point out that Dropbox didn’t exactly have a groundbreaking idea. The cloud platform was already an existing field in the market. People were already sharing and storing files in the cloud and there were companies already making this possible. However, when Dropbox decided what they wanted to build, they took the idea, ran with it, and perfected it. Yes, they were doing something many other software companies were already doing, but they made sure they were really good at it.

Dropbox made a folder we could put stuff in. This folder would sync. Then we would share its contents. While the market already had cloud storage, no one had invented a folder that did this. Dropbox is proof that your mode of execution plays a big role in your level of success. OmniDrive is one example of a company that tried to sell the idea of cloud storage to the public. They launched in 2004 and died by 2008. OmniDrive simply made the mistake of executing the same script poorly.

At Pressfarm, we care about startups that are going up against giants. In order to help these startups succeed, we have evolved as the needs of our customers evolved. Initially, we were just a database where entrepreneurs could search for journalists in order to generate publicity. Today, we’re a fully-fledged PR agency which partners with brands to produce winning press releases and memorable feature articles that showcase the unique qualities of each brand. In addition, we can also help you pitch your brand to the right people in the media. Reach out today and let us help you share your brand story with the world.